Arsenal are set to make a formal £8m offer to Celtic for Manchester United target Virgil van Dijk ahead of a potential January move, according to reports.

The summer transfer window may be closed but managers are already thinking ahead to future transfer windows so we’ll bring you all the latest news and gossip. Today, Arsenal are set to bid for Man Utd target Virgil van Dijk. 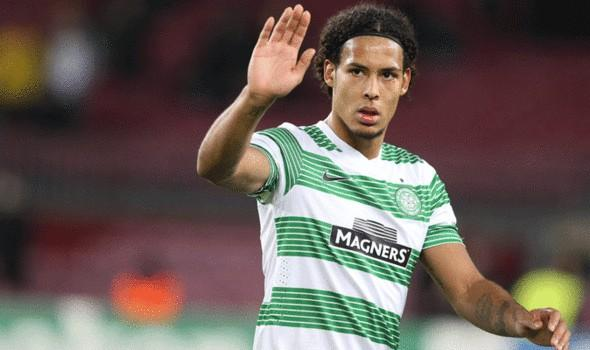 Arsenal are set to make a formal £8m offer to Celtic for Manchester United target Virgil van Dijk ahead of a potential January move, according to reports.

Gunners boss Arsene Wenger is short of options at the back after failing to replace Thomas Vermaelen when he was sold to Barcelona in the summer, with Calum Chambers left as the only recognised cover for Laurent Koscielny and Per Mertesacker at centre-back.

The North Londoners have been linked with a whole host of names in recent weeks but the Daily Star are citing reports coming out of Scotland that claim Wenger is preparing an £8m bid for Celtic’s Virgil van Dijk.

The newspaper suggests that the French boss had his scouts watch van Dijk in action against Dinamo Zagreb in the Europa League two weeks ago and is now ready to step up his interest ahead of a potential January move to the Emirates.

However, Arsenal aren’t the only one’s showing an interest in the 23-year-old as Manchester United are also understood to be keen on luring van Dijk to Old Trafford and the former champions could go head-to-head with their rivals over his signature.

Louis van Gaal has had problems at the back this season with the likes of Chris Smalling, Jonny Evans and Phil Jones all spending time on the sidelines, leaving the Dutchman short of options in defence, so he too is being tipped to make a move for Celtic’s 6ft 4″ defender.

It remains to be seen whether an offer of £8m would tempt the Scottish champions in to a sale but if they did accept, you’d think a move to either Arsenal or United would be too good an opportunity for the Dutch international to turn down.