Chelsea get back to Premier League action when they make the short trip across London to take on Crystal Palace on Saturday. Here is a predicted line-up

Chelsea get back to Premier League action when they make the short trip across London to take on Crystal Palace on Saturday afternoon. Here is a predicted line-up for the game:

Goalkeeper: Jose Mourinho has stuck by Thibaut Courtois as his number one and the goalkeeper is expected to be passed fit despite picking up a head injury against Arsenal before the international break.

Defence: Mourinho has gone with a settled back four for much of the season and I can’t see this changing on Saturday. Filipe Luis is pushing for a start at left-back but I think we’ll see Cesar Azpilicueta get the nod and start alongside John Terry, Gary Cahill and Branislav Ivanovic.

Midfield: Again, Mourinho has made few changes in midfield this season with Cesc Fabregas forging an impressive partnership alongside Nemanja Matic. Ramires could be back from injury but I’d expect we’ll see the first choice pairing start on Saturday.

Attack: Eden Hazard missed Belgium’s clash with Andorra because of a toe injury but his withdrawal is thought to have been a precautionary measure so he should be fit to start against Palace. Andre Schurrle also missed Germany’s draw with Ireland because of flu and although he’s likely to have recovered by this weekend, he might not be 100% yet so Jose may keep him on the bench and go with Willian and Oscar in attack.

Diego Costa featured in both of Spain’s Euro 2016 qualifiers over the past 10 days but he should have sufficient recovery time to be passed fit to start for Chelsea this weekend.

Here’s how I think Chelsea will line-up on Saturday: 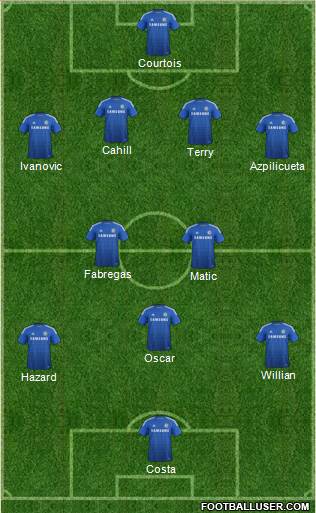