Koscielny Out, Arteta In: Predicted Arsenal Starting XI To Take On Hull

Arsenal get back to Premier League action when they entertain Hull City at the Emirates on Saturday afternoon. Here is a predicted line-up for the game:

Arsenal get back to Premier League action when they entertain Hull City at the Emirates on Saturday afternoon. Here is a predicted line-up for the game:

Goalkeeper: Some fans were calling for Wojciech Szczesny to be dropped before the international break after a couple of inconsistent displays but I don’t see Arsene Wenger changing his No.1 any time soon.

Defence: We have problems at the back as Laurent Koscielny has been ruled out with tendinitis. Calum Chambers would usually step in but he’s suspended so Wenger is expected to start Nacho Monreal alongside Mertesacker. The only other alternative would be to hand Isaac Hayden his league debut but I think the boss will go with experience. Hector Bellerin will start at right-back with both Chambers and Debuchy unavailable.

Midfield: Our problems are easing in midfield with Mikel Arteta back in the squad having returned to training this week. The Spaniard should start alongside Jack Wilshere and Santi Cazorla with Mathieu Flamini dropping out if Wenger goes with his 4-1-4-1 formation. Aaron Ramsey is due back in training on Monday but this game comes too soon.

Attacker: Mesut Ozil has been ruled out for at least six weeks so Alex Oxlade-Chamberlain could start on the right with Alexis Sanchez on the left. Theo Walcott will play for the Under-21’s on Friday but isn’t expected to feature in this game. Danny Welbeck will continue to lead the line despite picking up an ankle knock for England on Sunday night.

Here is how I think Arsene will line-up on Saturday: 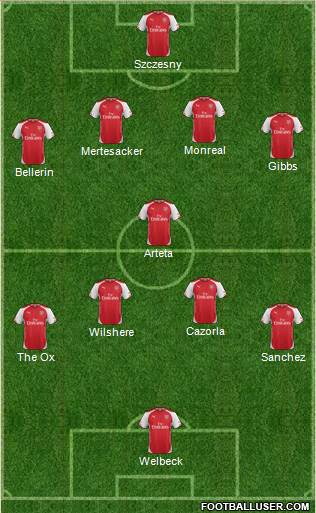