Manchester United will look to climb back in to the top four when they take on West Bromwich Albion this evening. Here is a predicted line-up for the game.

Manchester United will look to climb back in to the top four when they take on West Bromwich Albion this evening. Here is a predicted line-up for the game.

Goalkeeper: David De Gea has been in superb form of late and there’s no doubt he’ll start in goal once again tonight.

Defence: Louis van Gaal’s problems in defence are easing with Phil Jones back in contention after recovering from a hamstring injury. The England ace is expected to come in and partner Marcos Rojo at the back with Paddy McNair ruled out through injury. Chris Smalling is close to full fitness but may just miss out along with Jonny Evans, meaning Rafael should keep his place at right back with Luke Shaw on the left.

Midfield: Antonio Valencia has picked up a minor hamstring problem and Ander Herrera may not be risked ahead of the Chelsea game despite recovering from a rib injury, so Darren Fletcher could come in to midfield alongside Daley Blind. Angel Di Maria is expected to keep his place on the left side of the midfield diamond.

Attack: With Wayne Rooney suspended, Louis van Gaal must decide who to start in the ‘hole’ behind Robin van Persie and Radamel Falcao. There has been talk that Adnan Januzaj could start but I think the Dutch boss will stick with Juan Mata. 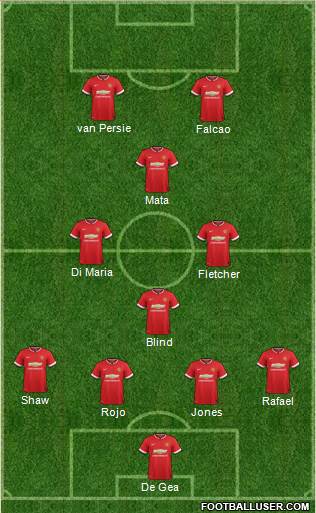 What do you think of the team? What line-up would you pick for the game?