Chelsea take on Maribor at Stamford Bridge tonight in their Champions League Group G clash. Here is a preview with team news, likely line-up and prediction.

Chelsea will look to take another step closer to securing qualification to the knockout stages of the Champions League when they take on Maribor at Stamford Bridge tonight.

The Blues moved top of Group G with a 1-0 win over Sporting Lisbon in Portugal last time out after kicking off the campaign with a 1-1 draw at home to German side Schalke.

Jose Mourinho’s men warmed up for the game with a hard fought 2-1 win over Crystal Palace on Saturday afternoon to ensure they maintained their five-point lead over Manchester City at the top of the Premier League table.

With Chelsea enjoying a sensational start to the season, it’s easy to see why they are the heavy favourites tonight, but Mourinho insists he’s not underestimating Maribor and expects a difficult game.

Maribor made it through to the group stages after knocking out Scottish champions Celtic in the qualifiers and the Slovenians have already shown they are capable of mixing it at the top level with draws against both Sporting and Schalke in their opening two games to see them sit second on goal-difference in Group G.

Chelsea will be without star striker Diego Costa as he continues to struggle with a niggling hamstring injury so Mourinho must decide whether to recall Didier Drogba or stick with Loic Remy up front.

Drogba returned from a three week absence with a substitute appearance on Saturday but he’s unlikely to be deemed fit enough to play the full ninety so Remy is expected to get the nod once again.

Ramires trained on Monday but isn’t expected to be in the squad as he continues to recover from a groin injury and Andre Schurrle is set to join him on the sidelines as he’s still feeling the effects of flu.

John Obi Mikel arrived back from the international break with a foot injury so he too is likely to miss out tomorrow, but Mohamed Salah may get a rare start in attack.

Cesar Azpilicueta is suspended at the weekend following his sending off against Palace so this could see Branislav Ivanovic rested with Filipe Luis coming in at left-back. 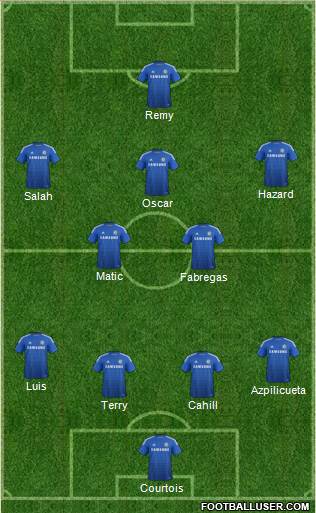 Cesc Fabregas: The Spaniard has been in sensational form following his summer move from Barcelona and Mourinho will be looking for more magic from the little maestro this evening.

Chelsea 2-0 Maribor: The visitors are going to be right up for this game and will no doubt give Chelsea a hard time, but the hosts quality should see them to all three points in the end.

What team would you select for the game and whats your predicted score?