Arsenal get back to Premier League action when they take on Sunderland at the Stadium of Light on Saturday afternoon. Here is a predicted team from Gooner Mac.

Arsenal get back to Premier League action when they take on Sunderland at the Stadium of Light on Saturday afternoon. Here is a predicted team from Gooner Mac.

Goalkeeper: Wojciech Szczesny is set to return from his European ban which will see 22-year-old Emiliano Martinez drop back to the bench. David Ospina remains out for the foreseeable future with a thigh injury.

Defence: Our defence was a mess on Wednesday night and unfortunately it doesn’t look like Laurent Koscielny will be back for the trip to Sunderland this weekend so Nacho Monreal is likely to continue his partnership alongside Per Mertesacker at the back. Calum Chambers and Kieran Gibbs are expected to fill the full-back slots.

Midfield: Jack Wilshere is suspended after picking up his fifth booking of the season against Hull last weekend so Aaron Ramsey should keep his place in midfield and could be joined by Santi Cazorla in a more central role.

Mikel Arteta is pushing for a recall after recovering from a calf injury so he should replace Mathieu Flamini in front of the defence.

Attack: With Cazorla in the middle it could see Alex Oxlade-Chamberlain come in to the side, although Lukas Podolski is also pushing for a start after scoring the winner against Anderlecht on Wednesday night. Danny Welbeck is fit despite picking up a minor knock last night so he’ll lead the line with Alexis Sanchez in support.

Here’s how I think we’ll line-up this weekend: 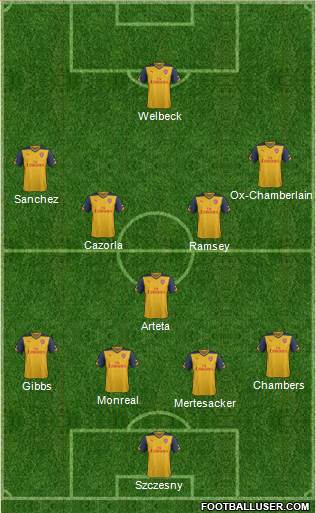