Jose Mourinho is expected to make wholesale changes when Chelsea visit Shrewsbury in the Capital One Cup on Tuesday. Here is the side we predicted he’ll put out

Jose Mourinho is expected to make wholesale changes when Chelsea visit League Two outfit Shrewsbury in the Capital One Cup on Tuesday night. Here is the side we predicted he’ll put out:

Goalkeeper: Mourinho is almost certain to hand Petr Cech a rare start in goal to give number one Thibaut Courtois a well-earned rest.

Defence: The Blues boss has limited options for rotation in defence with Cesar Azpilicueta and Branislav Ivanovic both suspended. Kurt Zouma should start in place of John Terry while youngster Nathan Ake could get a run-out, but Gary Cahill and Filipe Luis may have to play their second game in three days.

Midfield: Cesc Fabregas and Nemanja Matic are expected to be rested so John Obi Mikel is almost certain to start in midfield. The Nigerian could be partnered by youngster Nathan Baker if Mourinho wants to hand the 19-year-old a rare start in the first team.

Attack: Eden Hazard and Willian are likely to be rested with Mohamed Salah and Ramires coming in if the Brazilian is deemed fit enough after overcoming a groin injury that’s kept him out for over five weeks. Oscar only played 65 minutes on Sunday so he could retain his place in attack.

With Diego Costa struggling with a niggling hamstring injury and Loic Remy out with a groin problem, Mourinho is unlikely to take any risks with Didier Drogba. It means Andre Schurrle could start up front unless the Blues boss wants to hand youngster Dominic Solanke his full debut. 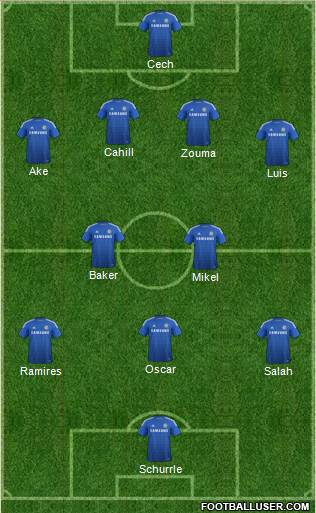