Chelsea will be hoping to avoid an upset when they travel to Shrewsbury Town in the fourth round of the Capital One Cup tonight. Here’s a preview with team news

Chelsea will be hoping to avoid an upset when they travel to Shrewsbury Town in the fourth round of the Capital One Cup tonight.

Jose Mourinho’s men have enjoyed an excellent start to the season and maintained their unbeaten start with a 1-1 draw against Manchester United at Old Trafford on Sunday to leave then sitting four points clear of second-placed Southampton in the Premier League table.

The Blues made it through to the fourth round of the League Cup with a 2-1 win over Bolton Wanderers at Stamford Bridge and they face a tricky test away at Shrewsbury once again this evening.

The Shrews head into the game in fine form with four straight wins seeing Micky Mellon’s men sit just three points off top spot in League Two so they’ll be hoping to pull off a major shock at Greenhous Meadow having already beaten Blackpool, Leicester and Norwich on their way to the fourth round.

This will be like a cup final for the home side so understandably tickets for the match are hard to come by, but you can check out www.1st4footballtickets.com to see if they have any last minute deals or tickets available for the big clash.

Mourinho is expected to make several changes to his line-up as Chelsea play just 48 hours after their match against United.

Petr Cech should come in for Thibaut Courtois in goal while Nathan Ake and Kurt Zouma should come into the defence with Branislav Ivanovic and Cesar Azpilicueta both suspended.

Mohamed Salah will also startt in attack with Eden Hazard likely to be rested while John Obi Mikel should come in for Cesc Fabregas in midfield.

Diego Costa and Loic Remy are still injured and Didier Drogba is unlikely to be able to start again having completed the 90 minutes on Sunday, so Andre Schurrle could lead the line tonight.

Ramires is unlikely to feature due to an on-going groin problem, so Namanja Matic may have to play in midfield. 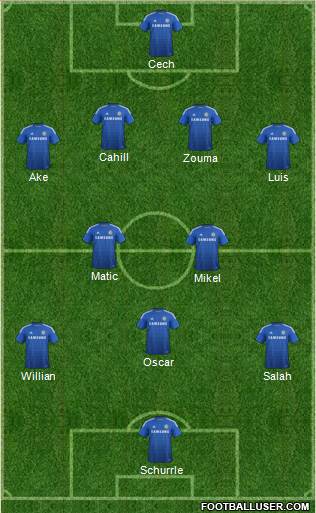 Oscar: The Brazilian has been in fine form of late and with the likes of Eden Hazard and Cesc Fabregas likely to be rested, Mourinho will be looking to Oscar to add some creativity in attack.

Shrewsbury 0-2 Chelsea: Despite making a number of changes, I still fully expect Chelsea to be too strong for the League Two minnows.