Arsenal are closing in on Manchester United target Mats Hummels after reportedly agreeing a €40m deal with Borussia Dortmund to sign the defender in January.

The summer transfer window may be closed but managers are already thinking ahead to future transfer windows so we’ll bring you all the latest news and gossip. Today, Arsenal are linked with Man Utd target Mats Hummels. 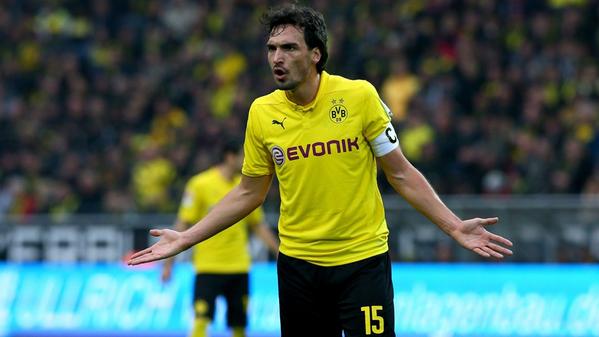 Arsenal are closing in on the signature of Manchester United target Mats Hummels after reportedly agreeing a €40m deal with Borussia Dortmund to sign the defender in January.

Hummels’ future at the Wesfalonstadion has been cast in doubt as talks continue to drag over a contract extension, with Dortmund understood to be unwilling to meet his wage demands.

This has led to speculation the 25-year-old could be set for a move and reports last month suggested that Arsenal were confident of seeing off competition from Manchester United to bring the defender to the Premier League.

It was initially thought any deal would wait until next summer, however, the Daily Star claim that the Gunners want to do business in January and have now taken a huge step closer to securing his signature after holding extensive talks with Dortmund in recent weeks.

And the newspaper suggests that Arsene Wenger has now agreed terms over a €40m (£31.5m) deal that will see the World Cup winning centre-back make the move to the Emirates this winter.

If these reports are accurate, it would be a sensational coup from Arsenal as Hummels is regarded as one of the best central defenders in the world and it would be a big statement if they were able to beat the likes of United to his signature.

I’d still be hugely surprised if Dortmund agreed to sell mid-season, but I suppose if the player isn’t going to sign a new deal and the offer is tempting enough, they might have decided now is the best time to cash-in.

It remains to be seen how United will react to these rumours as I’m sure Louis van Gaal won’t give up without a fight, but it appears as of now Arsenal are firmly in the driving seat.

The North Londoners are certainly short at the back as Wenger has been forced to play Nacho Monreal as a make-shift centre-back in recent weeks while Laurent Koscielny has been out, so another option at the back is needed in January and Hummels would be a great peice of business if they could pull it off.