Arsenal are back in Champions League action tomorrow night when we take on Anderlecht at the Emirates. Here’s a predicted starting line-up for the game:

Arsenal are back in Champions League action tomorrow night when we take on Anderlecht at the Emirates. Here’s a predicted starting line-up for the game:

Goalkeeper: Wojciech Szczesny will return in goal after missing the 2-1 win away at Anderlecht two weeks ago.

Defence: I don’t see Arsene Wenger making any changes at the back and he doesn’t really have many options even if he did want to mix things up. Laurent Koscielny remains out with an Achilles problem so he joins Mathieu Debuchy on the sidelines. Hector Bellerin could be an option at right-back but I think Arsene will stick with a settled back-four.

Midfield: Jack Wilshere is expected to miss out with a knee injury that saw him miss the win over Burnley at the weekend. Arsene has gone with Mathieu Flamini alongside Mikel Arteta in midfield over the last two games but it’s not balanced for me and I think we might see Ramsey return to the starting eleven tomorrow.

Attack: Theo Walcott made his long-awaited comeback on Saturday with an impressive cameo but I don’t think he’ll be risked from the start yet, so Alex Oxlade-Chamberlain is likely to continue out on the right. Alexis Sanchez has excelled in a free-role in the middle behind Danny Welbeck recently so hopefully that will continue with Santi Cazorla likely to keep his place despite some below par displays of late.

Lukas Podolski is pushing for a start but will most likely have to make-do with a place on the bench again, while Mesut Ozil and Olivier Giroud remain on the sidelines.

This is how I think we’ll see Arsene line-up his side tomorrow: 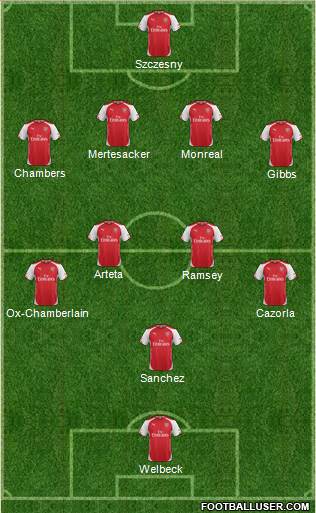