Liverpool are back in Champions League action tomorrow night when they take on Real Madrid at the Bernabeu. Here’s a predicted starting line-up for the game:

Liverpool are back in Champions League action tomorrow night when they take on Real Madrid at the Bernabeu. Here’s a predicted starting line-up for the game:

Goalkeeper: No doubt Simon Mignolet will start in goal unless he picks up a last minute injury.

Defence: Javier Manquillo is expected to be recalled at right-back with Glen Johnson dropping out and the youngsters Atletico Madrid links should ensure he’s well up for the game. Otherwise I think we’ll see Martin Skrtel alongside Dejan Lovren in the heart of defence with Mamadou Sakho still injured, while Alberto Moreno should start at left-back.

Midfield: Joe Allen failed to impress against Newcastle on Saturday so we could see Emre Can come in to offer more protection in front of the defence and to help counter the devastating Madrid attack. There have been rumours in Spain that Steven Gerrard could be rested ahead of the Chelsea game this coming weekend but I think we’ll see the skipper line-up alongside Jordan Henderson in midfield as usual.

Attack: Philippe Coutinho has been one of Liverpool’s better players recently so you’d expect he’ll keep his place ahead of the likes of Adam Lallana. Daniel Sturridge has travelled to Madrid but the best we can hope for is a place on the bench as he can’t be 100% fit yet after thigh and calf injuries, so Raheem Sterling is expected to support Mario Balotelli in attack.

This is how I think we’ll see Liverpool line-up tomorrow: 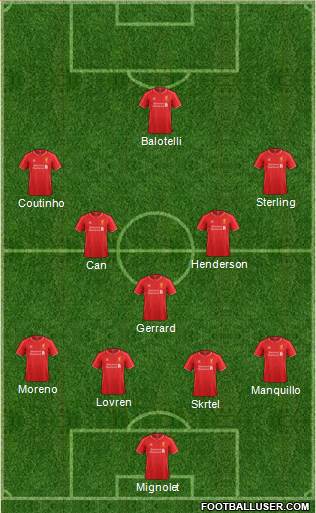