Chelsea will be hoping to secure qualification to the knockout stages of the Champions League when they take on Maribor this evening. Here’s a preview.

Chelsea will be hoping to secure qualification to the knockout stages of the Champions League when they take on Maribor this evening.

The Blues head into the game sitting two points clear of second-placed Schalke and five ahead of Maribor, so victory tonight coupled with Sporting Lisbon dropping points at home to Schalke would ensure Chelsea progress to the next phase.

Jose Mourinho has warned against complacency following his sides 6-0 thrashing of tonight’s opposition at Stamford Bridge two weeks ago, which ensured they remain unbeaten in 15 games in all competitions this season.

It’s certainly been an impressive start by the West Londoners as they also sit four points clear at the top of the Premier League table after the first 10 games, so you’d be a braver man than me to bet against them beating Maribor to make it 13 wins from 16 matches this evening.

Mourinho has hinted he may take the opportunity to make a few changes ahead of Saturday’s crunch clash with Liverpool.

Petr Cech is expected to start in goal while youngster Kurt Zouma could also come in for Gary Cahill at the back.

Diego Costa made his return from injury against QPR on Saturday but is unlikely to be risked from the start tonight, so with Loic Remy still out with a groin problem, Didier Drogba is in-line to start up front.

John Obi Mikel is the only other absentee with the Nigerian left back in London nursing a knee injury. Ramires could make his first start in over six weeks after recovering from a groin injury.

Cesar Azpilicueta returns to the squad after serving his three-game domestic ban and the Spaniard is likely to come in at left-back. 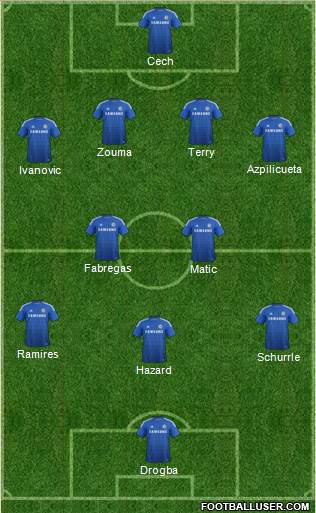 Eden Hazard: With the likes of Oscar and Diego Costa likely to be rested the onus will be on Hazard to provide the spark in the final third. Maribor will want to pay close attention to the Belgian international.

Maribor 0-2 Chelsea: Despite Mourinho insisting Chelsea shouldn’t be taking anything for granted tonight, I still think the Blues will head back to London with another three points under their belt.

What team would you like to see start the game and whats your predicted score?