Manchester United are lining-up a January swoop for Arsenal target Ron Vlaar as his contract stand-off with Aston Villa continues, according to reports.

The summer transfer window may be closed but managers are already thinking ahead to future transfer windows so we’ll bring you all the latest news and gossip. Today, Man Utd are linked with a move for Arsenal target Ron Vlaar. 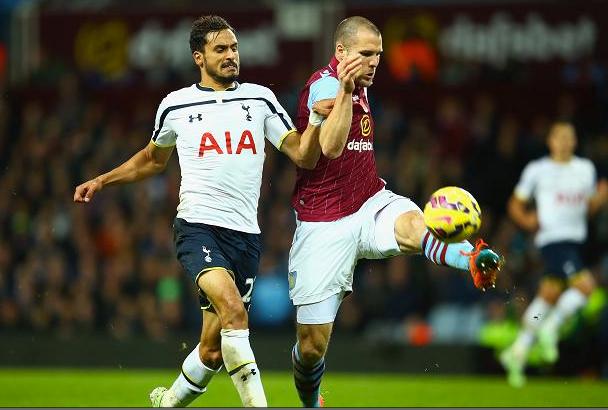 Manchester United are lining-up a January swoop for Arsenal target Ron Vlaar as his contract stand-off with Aston Villa continues, according to reports.

Vlaar is in the final year of his current deal at Villa Park and despite several rounds of talks between the club and his representatives, no agreement has been reached over an extension.

The uncertainty over his future has led to interest from the upper echelons of the Premier League with Arsenal and Man Utd both strongly linked with a move for the 29-year-old in recent months.

However, it seems United are ready to make their interest official with the Mirror claiming that Louis van Gaal has identified his compatriot as the man to solve his defensive woes and will test Villa’s resolve when the transfer window reopens in January.

van Gaal knows Vlaar well from their time together with the Dutch national team and the United boss hopes this bond will be enough to persuade the centre-back to snub interest from other clubs and make the move to Old Trafford.

Paul Lambert is desperate to keep hold of his skipper but the decision may be taken away from him if a new deal isn’t agreed soon as the Aston Villa money-men may feel it best to cash-in this winter rather than risk losing him for nothing in the summer.

Vlaar would certainly be a useful addition to United if they are able to pull off his signing as their season has been plagued by a series of injuries at the back. Jonny Evans, Chris Smalling and Phil Jones have all missed large parts of the campaign while summer signing Marcos Rojo is now facing a spell out with a dislocated shoulder, so reinforcements are going to be needed in January and it appears van Gaal wants to be reunited with his countryman if they can get a deal agreed with Villa.

It remains to be seen how Arsenal will react as the Gunners are also in desperate need of another centre-back. Arsene Wenger failed to adequately replace Thomas Vermaelen in the summer and with Laurent Koscielny struggling with an on-going Achilles injury, Nacho Monreal has been forced to fill-in alongside Per Mertesacker in defence.

The North Londoners could therefore do with an experienced head at the back and Vlaar would certainly fit the bill, but it’s not clear whether Wenger will pursue the Dutchman or switch focus to alternative targets, leaving United in the clear to snap him up.