Chelsea have little time to recover from their excursions last night as they take on Liverpool on Saturday. Here is the team we think Jose Mourinho will go with

Chelsea have little time to recover from their excursions in the Champions League last night as they travel to Anfield to take on Liverpool on Saturday lunchtime. Here is the line-up we think Jose Mourinho will go with:

Goalkeeper: Thibaut Courtois should come straight back in after Petr Cech was given a rare run-out against Maribor last night.

Defence: Cesar Azpilicueta is likely to replace Filipe Luis at left-back after serving his three-match domestic ban. Gary Cahill will also be recalled in place of Kurt Zouma after being given a breather on Wednesday night. John Terry and Branislav Ivanovic will retain their places at the back.

Midfield: Mourinho is unlikely to make any changes in midfield as Cesc Fabregas and Nemanja Matic are excelling in the middle of the park. John Obi Mikel is struggling with a knee injury which limits his options for rotation in any case.

Attack: Diego Costa came on at half-time last night but he’s expected to be restored to the starting eleven on Saturday with Didier Drogba making way. Oscar was also introduced at the break against Maribor and the Brazilian playmaker will take up his place in attack with Andre Schurrle the most likely to drop out, meaning Eden Hazard and Willian keep their places in the team.

So here is how we think Chelsea will line-up against Liverpool this weekend: 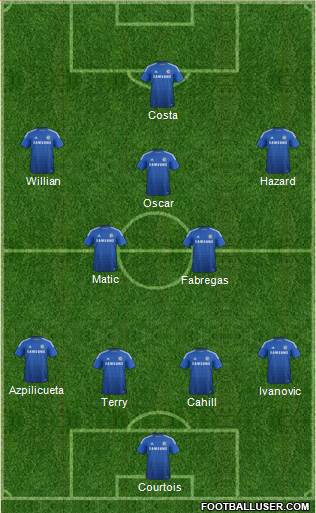