Manchester United attacker Angel Di Maria has admitted he could miss this weekends trip to Arsenal after picking up a foot injury with Argentina last night. 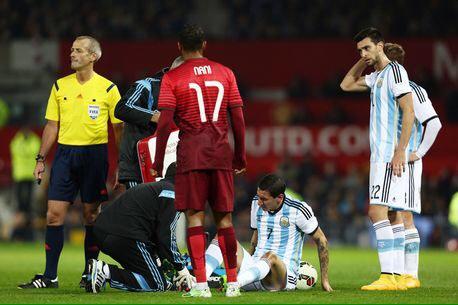 Manchester United attacker Angel Di Maria has admitted he could miss this weekends trip to Arsenal after picking up a foot injury last night.

Di Maria started for Argentina during a 1-0 friendly defeat to Portugal at Old Trafford on Tuesday night but received lengthy treatment on his foot after being caught late by former team-mate Nani.

Nani is currently on a season long loan at Sporting Lisbon and did little to endear himself to the United faithful after catching Di Maria with a nasty late challenge – which can be seen in the video below.

The Argentinean international continued to play on before eventually being substituted in the 62nd minute when he limped off the field to be replaced by Tottenham’s Erik Lamela.

Di Maria has now been sent for further scans to see if there is any lasting damage and although the 26-year-old has admitted he could miss this weekend’s clash with Arsenal if the foot continues to swell, he hopes it will calm down so he can make the trip to the capital on Saturday.

He told reporters after the game:

“It was just a blow. I hope it doesn’t swell anymore so I can play at the weekend.”

Argentina coach Gerardo Martino also eased fears over the severity of the injury, telling reporters that it was just a knock and although Di Maria did suffer a minor cut, they hope scans will prove it was nothing more serious.

“We don’t think it is anything serious. It was quite a tough blow he took.

“It was a tough knock. It cut the skin a little bit. But we have had a look at it and we are evaluating the situation.

“We are having a look at some X-rays, some images that have been taken but in spite of that we don’t think it is too serious.” Martino is quoted as saying by the Daily Star

United boss Louis van Gaal will now be sweating on the results of those scans as losing Di Maria is the last thing he needs right now. The Dutchman has had to deal with a lengthy injury list during the opening few months of his tenure at Old Trafford and he heads into the Arsenal match with as many as 12 injury doubts.

Daley Blind is set to miss out after picking up a knee injury while David De Gea is also doubtful after dislocating his finger last week. Luke Shaw tweaked a hamstring injury playing for England last night and Michael Carrick withdrew from the squad after picking up a groin injury last week, so Di Maria makes it five players to have suffered injuries during the international break.

If the quintet are all ruled out they will join Marcos Rojo, Rafael, Radamel Falcao, Ashley Young, Phil Jones, Jonny Evans and Jesse Lingard in the treatment room – although van Gaal does hope to have several of those players in contention this weekend.