Man Utd are said to be ‘hopeful’ of securing a deal to sign €58m-rated Arsenal target Mats Hummels during the January transfer window, according to reports.

The summer transfer window may be closed but managers are already thinking ahead to future transfer windows so we’ll bring you all the latest news and gossip. Today, Manchester United are linked with a move for Borussia Dortmund’s Mats Hummels. 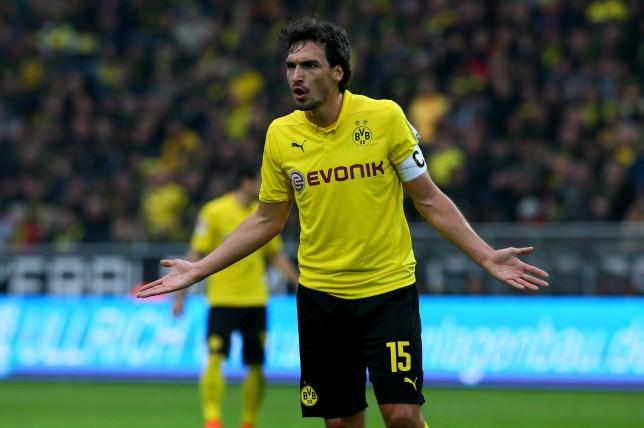 Manchester United are said to be ‘hopeful’ of securing a deal to sign €58m-rated Arsenal target Mats Hummels during the January transfer window, according to reports.

Hummel’s future at the Westfalenstadion has been thrown into doubt as talks over a contract extension continue to stall and understandably he’s attracting interest from a number of top European clubs.

Arsenal have been strongly linked with a move for the German international in recent months with boss Arsene Wenger recently admitting he needs to strengthen at the back after failing to bring in an adequate replacement for Thomas Vermaelen in the summer.

The North Londoners lack of depth in defence has been exposed in recent weeks with Nacho Monreal being forced to play as a make-shift central defender while Laurent Koscielny has been out with an Achilles injury, so it would be no surprise to see the Gunners bring in another option this winter and it appears Hummels is on the radar.

However, it seems Arsenal will have to fend off serious competition from Manchester United with the Guardian reporting that Louis van Gaal is exploring the possibility of taking the 25-year-old to Old Trafford in January.

The newspaper claims that van Gaal had identified Hummels as a key summer target but now executive vice-chairman Ed Woodward is hopeful a deal can be agreed this winter as it’s believed Dortmund  would reluctantly sell if the price is right.

Woodward confirmed to investors at a meeting on Tuesday that the club would look to bring in their summer targets early if the opportunity presented itself:

“We are not looking to enter the market for short-term fixes,”

“However, we have targets we are looking at for next summer. Should any of them become available in January, which is obviously rare, we will consider acting but it is a low probability.” Woodward is quoted as saying by the Guardian.

Dortmund have endured a disastrous opening to the new season as they currently sit fourth from bottom in the Bundesliga table and with Hummels set to enter the final two years of his contract next summer and no sign of a new deal being penned any time soon, the German giants may be decide to cash-in this winter.

Any potential deal is expected to smash the British transfer record for a defender – currently set at the £32m Man City paid for Eliaquim Mangala in the summer – with some reports suggesting that Hummels is valued in the region of €58m (£47m).

That kind of money seems excessive for a defender but you wouldn’t be surprised if someone agreed to pay it in today’s over-inflated transfer market for a player who is widely acknowledged as one of the best in the world in his position.

United’s season has been plagued by injuries with van Gaal’s squad particularly hit at the back with Jonny Evans, Rafael and Phil Jones all spending long periods on the sidelines while Marcos Rojo is also facing a spell on the treatment table after dislocating his shoulder just before the international break.

It remains to be seen whether the Red Devils are able to secure a deal to bring Hummels to Old Trafford in January but he’d certainly be a sensational signing and go a long way to helping resolve their current defensive woes.