Liverpool will be in the capital this weekend when they take on Crystal Palace at Selhurt Park on Sunday. This is the team we think Brendan Rodgers will select:

Liverpool will be in the capital this weekend when they take on Crystal Palace at Selhurt Park on Sunday afternoon. This is the line-up we think Brendan Rodgers will select:

Goalkeeper: No doubt Simon Mignolet will start this game in goal unless he picks up a late injury.

Defence: Many fans are calling for Kolo Toure to be given a run of games after his hugely impressive display against Real Madrid but Rodgers seems to prefer the Skrtel-Lovren partnership so I think we’ll see it again this weekend. Javier Manquillo could get a run-out in place of Glen Johnson at right-back but Alberto Moreno should start on the left with Jose Enrique struggling with a knock.

Midfield: Steven Gerrard is expected to once again skipper the side in the holding role while Jordan Henderson is set to shake-off a minor hamstring strain which saw him sit out of England’s win over Scotland. Emre Can looks to have played his way into Rodgers’ line-up so could once again get the nod ahead of Joe Allen and Lucas Leiva.

Attack: Mario Balotelli is facing a late fitness test on a minor hamstring strain and with Daniel Sturridge set for another six weeks out with a thigh injury, it could open the door for Rickie Lambert to make a rare start up front. Raheem Sterling is expected to start and he could be joined by Adam Lallana if he is selected ahead of Philippe Coutinho and Lazar Markovic in attack.

So this is the line-up I think we’ll see Rodgers go with against Palace: 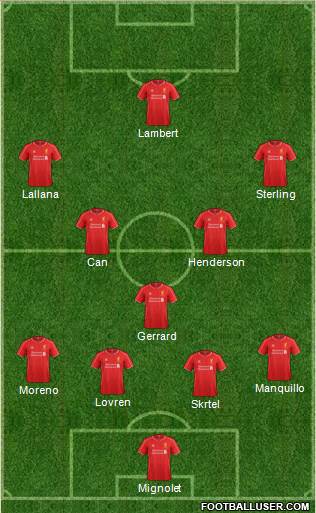