Arsenal boss Arsene Wenger confirmed that Mikel Arteta and Yaya Sanogo are facing time on the sidelines while he also gave an update on Jack Wilshere. 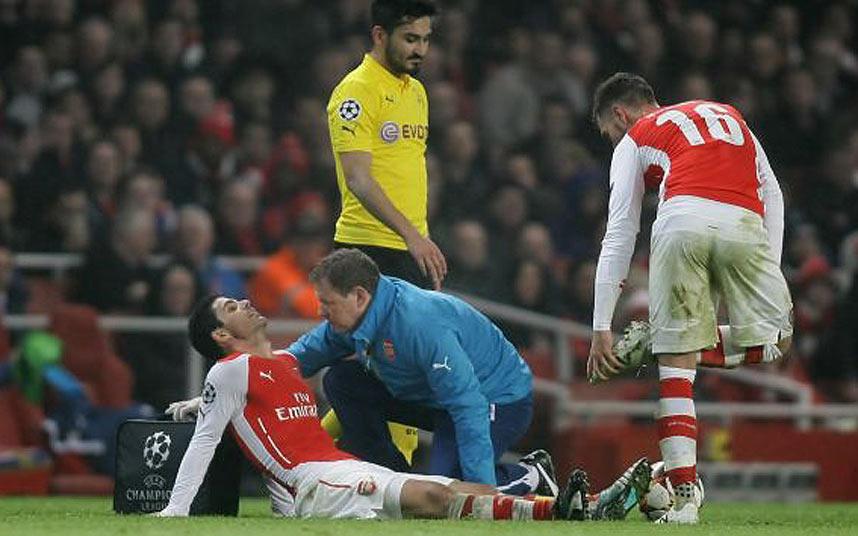 Arsenal boss Arsene Wenger confirmed that Mikel Arteta and Yaya Sanogo are facing time on the sidelines after picking up fresh injuries during last night’s win over Borussia Dortmund.

Arteta was forced off midway through the second half after suffering yet another calf injury during our 2-0 win over Jugen Klopp’s side – which secured qualification to the knockout stages of the Champions League.

Speaking to reporters after the game, Wenger confirmed the Spaniard’s injury looks like it’s a bad one and expects the midfielder will now be out for ‘a while’.

The boss stopped short of offering any time-scale on how long he thinks Arteta will be on the treatment table for, but the Mirror claims the 32-year-old is facing six weeks out.

In what was another frustrating night of injuries, Yaya Sanogo was also forced off late on after picking up a hamstring injury and the young striker now looks set for another spell on the sidelines.

“Mikel Arteta doesn’t look good – it’s a calf. I think he will be out for a while.

“Arteta again has a calf problem and that looks quite serious and we lost Sanogo as well on a hamstring problem.”

While you’ve got to feel for Sanogo picking up an injury on the night he finally opened his account for Arsenal with a well-taken goal, the major blow is losing Arteta. He may not be the ideal holding midfielder but he’s certainly the best we’ve got in that position and is a real upgrade on Mathieu Flamini – who now looks set for an extended run in the first team.

The double blow comes just days after Jack Wilshere suffered another ankle injury and reports suggest the 22-year-old needs surgery and is facing up to four months out. However, speaking to Arsenal.com, Wenger insisted that the decision over surgery hasn’t been made yet and we’ll only find out the true extent of the injury once he sees a specialist today.

on whether Wilshere will need an operation…

I don’t know, the specialist will decide that.

We’re going to be extremely short of options in the middle of the park over the next six weeks if Arteta is ruled out and it looks like we’re going to have to pray that Aaron Ramsey and Mathieu Flamini stay fit.