Manchester United have been hit by a fresh injury blow with Luke Shaw set to miss at least two weeks with an ankle injury, according to the Mirror. 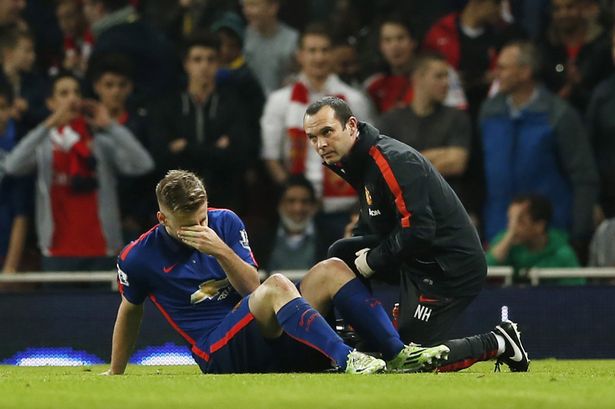 Manchester United have been hit by a fresh injury blow with Luke Shaw set to miss at least two weeks with an ankle injury he picked up against Arsenal, according to the Mirror.

Shaw was forced off midway through the first half during United’s 2-1 win over the Gunners last Saturday after turning his ankle awkwardly in the turf.

The 19-year-old left the Emirates Stadium on crutches and wearing a protective boot as fears grew that the youngster had suffered another injury set-back.

Those fears appear to have been realised as the Mirror are reporting that Shaw has strained his ankle ligaments and will now be on the sidelines for at least two weeks.

In some ways that could be considered a positive as the injury could have been much worse but it looks like United will now be without their first choice left-back for at least the next fortnight.

It means Shaw will miss this weekends clash with Hull City at Old Trafford as well as next weekends visit of Stoke City and the subsequent trip to St Mary’s to face in-form Southampton, but he’ll be hoping to return for the huge game against Liverpool on December 14th.

Shaw has only recently got back to full fitness after missing much of the new season with a hamstring injury so it’s another set-back in whats been a hugely frustrating start to life at United following his big-money move from Southampton in the summer.

It’s also another blow to boss Louis van Gaal as Shaw is the latest defender to be sidelined by injury with Marcos Rojo, Phil Jones, Rafael, Daley Blind and Jonny Evans all missing large portions of the season through injury – although Evans could be back in contention this weekend having come through an appearance for the reserves on Tuesday unscathed.