Arsenal got back to winning ways with an impressive 2-0 win over Borussia Dortmund on Wednesday night. Here, we look at their performance from back to front.

Arsenal got back to winning ways with an impressive 2-0 win over Borussia Dortmund on Wednesday night. Here, Gunner333 looks at their performance from back to front. 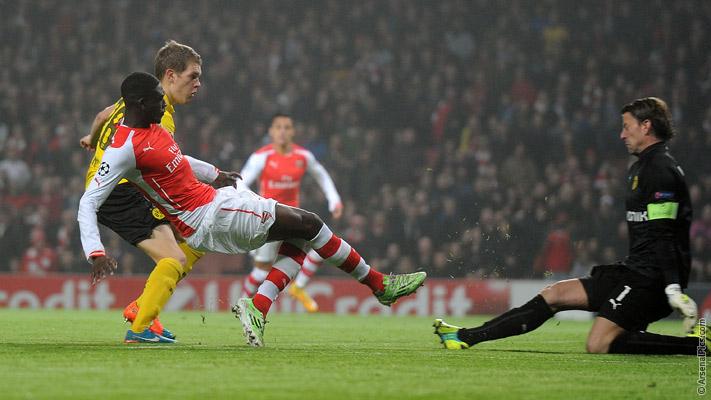 With recent results poor both domestically and in Europe, Arsenal were looking to register a confidence-boosting three points against Borussia Dortmund to the Emirates in midweek. A minor knock to Danny Welbeck prompted the most eye-catching of changes to both line-ups, Yaya Sanogo handed his first start of the season up front for Arsenal.

It didn’t take long for the French youngster to make his mark as he opened the scoring inside the opening 2 minutes, with the striker playing a neat one-two with Santi Cazorla before sliding an effort underneath the on-rushing Roman Weidenfeller.

Perhaps the greatest threat in the Dortmund armoury came through the pace of Aubameyang who causes the odd problem at the back, but the Gunners kept strong and later doubled our lead via an Alexis Sanchez beauty. The Chilean’s curling effort giving the Gunners some breathing space, just the point required to progress along with their opponents to the last 16.

No further response from a surprisingly frail Dortmund side, as Arsenal confirmed the victory as well as a greatly pleasing clean sheet. Now two points behind Dortmund in the group and already through to the next stage with the final group fixture against bottom Galatasaray remaining, some damage has been repaired.

I will now analyse this display from back to front.

Third-choice keeper Emiliano Martinez was solid throughout this clash, the defence looking more sturdy and organised than we have seen them in a very long time. Nacho Monreal especially seemed to perform the best he ever has done as a centre-half, whilst Mertesacker ordered the back-line comfortably.

It was pleasing to see that Wenger kept the full-backs under wraps as well, no signs of regular advances from Chambers or Gibbs, yet they did supply some extra bodies to the attack when needed.

Overall though, what the defence can be most proud of is amending the regular error of failing to deal with pace on the breaks and did so playing against one of the best counter-attacking team in Europe. This was personally my favourite display from the back-four this season.

Playing Dortmund requires great physical presence coupled with an intelligence to regain the ball quickly [Arsenal should know as this was the two sides’ 7th meeting in four years] and the midfield coped with Die Schwarzgelben’s usually intense, pressing game well. It was a much more measured performance, Aaron Ramsey especially showing greater composure and discipline to play for the team, as oppose to himself.

Wenger looked to set-up his middle men to match the ideas of the opposition and gave them very little space to exploit. Passing was precise and Cazorla especially portrayed delightful movement in the final third, with the Spaniard assisting both goals.

Criticised for losing our much-famed passing game, Arsenal put on the first real dynamic display all season in the middle, with shifts of positioning well-executed and the middle men contributed brilliantly at both ends of the field.

An early goal is always important in a game of such importance and via young-gun Sanogo, Arsenal did exactly that. The Frenchman converted a snap-shot goal, which showed great instinct and after that he had a relatively promising game leading the Arsenal line. Oxlade-Chamberlain again expressed great pace and innovative play up-top and was unfortunate not to get a goal after he smashed the cross bar with a great effort.

Despite missing a catalogue of chances between either goal, Arsenal’s front line did not have to pay the price and Sanchez’ strike was simply delectable. An intelligent player making the most of some incredibly lack-lustre Dortmund pressing.

No signs of Arsenal missing Danny Welbeck, as the attacking department served up a divine display in general, great work ethic from the Ox and Sanchez, whilst Yaya produced some great hold-up play and was a constant physical threat.

No manager turns from pantomime villain to a world-beater overnight, but that’s not to say this showing has handed Wenger a touch of breathing space, amid the current criticisms being thundered in his direction.

In a sticky situation domestically, the Frenchman made a very brave decision to start with Yaya Sanogo up-front, once again opting to ignore the services of Podolski, but fortunately the gutsy decision paid off.

The balance in the midfield’s commitments seems to have improved by an absolute landslide as evident from this game, Wenger clearly directing Rambo and Arteta to play more conservatively, and it was clear the full-backs had been given instructions to be less adventurous.