Liverpool will be looking to get their Premier League campaign back on track when they take on Stoke at Anfield. Here is our predicted line-up for the game

Liverpool will be looking to get their Premier League campaign back on track when they take on Stoke at Anfield on Saturday afternoon. This is the team we think Brendan Rodgers will select:

Goalkeeper: Simon Mignolet came under heavy criticism for his performance against Ludogorets on Wednesday night but his error for the opening goal is unlikely to see him dropped this weekend, so we expect the Belgian international to continue between the sticks.

Defence: Rodgers finally decided to drop big-money signing Dejan Lovren last time out and Kolo Toure could have done enough to retain his place alongside Martin Skrtel at the back. Alberto Moreno is expected to be recalled which could see Glen Johnson move to right-back with Javier Manquillo dropping out.

Midfield: There are some suggesting that Steven Gerrard could be rested against Stoke but if the skipper does play he may be moved back to his holding role after being deployed a little further forward against Ludogorets. Philippe Coutinho is likely to be recalled with Lucas Leiva missing out while Jordan Henderson should keep his place after a goal-scoring display in midweek.

Attack: Adam Lallana could come back in to the side in place of Joe Allen after not even getting off the bench in Bulgaria. Mario Balotelli faces a late fitness test on a groin problem but Rickie Lambert should have done enough to retain his place up front having scored in his last two appearances. Daniel Sturridge remains out with a thigh injury.

So this is how we think Liverpool will line-up this weekend: 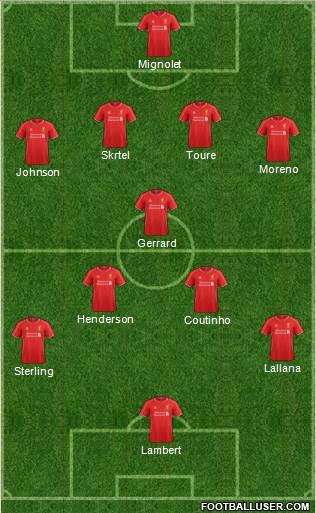