Arsenal will be looking to get their Premier League season back on track when they take on West Brom at the Hawthorns on Saturday. This is our predicted team.

Arsenal will be looking to get their Premier League season back on track when they take on West Brom at the Hawthorns on Saturday afternoon. This is the team Gooner Mac thinks Arsene Wenger will select:

Goalkeeper: Wojciech Szczesny is a major doubt as he’s yet to train after picking up a pelvic injury against Man Utd last Saturday, so Emiliano Martinez is expected to keep him place in goal.

Defence: Laurent Koscielny was an unused substitute against Borussia Dortmund on Wednesday night and although Arsene Wenger has confirmed the Frenchman is available, he hinted that he might stick with the back-four that kept a clean sheet in midweek. Koscielny has been rushed back from an Achilles injury so perhaps the boss is wanting to play it safe and not take any risks with him. Nacho Monreal played very well against Dortmund so hopefully he can keep up that form if he does start tomorrow.

Midfield: Jack Wilshere is out for three months after having surgery on an ankle ligament injury and with Mikel Arteta also out for three weeks with a calf problem, Mathieu Flamini will start alongside Aaron Ramsey in midfield tomorrow.

Attack: Danny Welbeck trained this morning for the first time since suffering a knee injury against United last weekend so it looks like he should return to the starting eleven against West Brom. Yaya Sanogo picked up a knock in midweek so Olivier Giroud may make his first start in three months if Welbeck isn’t deemed fit enough to start. Santi Cazorla, Alexis Sanchez and Alex Oxlade-Chamberlain were all excellent against Dortmund so deserve to keep their places. Theo Walcott has been ruled out for a further week with a groin injury.

So this is how we think Arsenal will line-up this weekend: 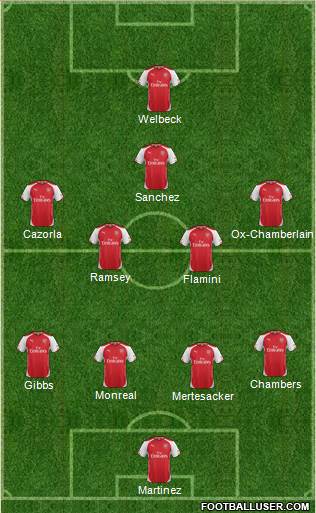