Arsenal’s 1-0 win over WBA came at a cost as Arsene Wenger has confirmed that Alex Oxlade-Chamberlain, Kieran Gibbs and Nacho Monreal all picked up injuries 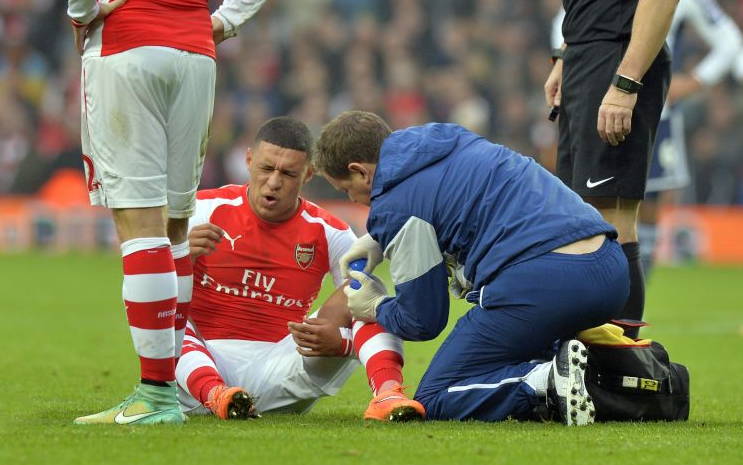 Arsenal got back to winning ways in the Premier League with a 1-0 win over West Brom at the Hawthorns this afternoon.

However, the victory came at a cost as Arsene Wenger has confirmed to Arsenal.com that Alex Oxlade-Chamberlain, Kieran Gibbs and Nacho Monreal all picked up injuries during the win.

With Laurent Koscielny restored in the middle of defence, Monreal started at left-back but was forced off early on in the first half after jarring his knee competing for a header.

The Spaniard was replaced by regular left-back Gibbs but the England international also picked up an injury after appearing to twist his ankle midway through the second half. With no recognised defenders on the bench, Gibbs was forced to carry on but was uncomfortable for the rest of the game.

Oxlade-Chamberlain was introduced as a late substitute but he still had time to make it three injuries when the attacker was caught on his knee while challenging for the ball. He too stayed on the pitch for the final five minutes but was seen to be hobbling.

Speaking to the clubs website after the game, Arsene confirmed all three players had suffered knocks but he won’t know how serious the injuries are until the trio are assessed on Monday.

on whether the injuries are serious…

I don’t know. We have to see how they recover on Monday. We have Oxlade-Chamberlain, Monreal and Gibbs who have knocks but I don’t know how bad it is.

It seems like we just can’t make it through a game without picking up at least one injury. In fact, in our last three games alone, seven players have suffered injuries ranging from a minor knock [Welbeck] to three months out with ankle ligament damage [Wilshere].

It’s becoming ridiculous and we better pray that Monreal, Gibbs and Oxlade-Chamberlain’s injuries aren’t serious or we’ll struggle to field a team against Southampton on Wednesday night.

We already had 10 players missing from today’s squad with Mesut Ozil, Mikel Arteta, Jack Wilshere, Abou Diaby, Serge Gnabry, David Ospina, Wojciech Szczesny, Theo Walcott, Yaya Sanogo and Mathieu Debuchy all out. Only Szczesny and Sanogo have a chance of returning in midweek, so we really are down to the bare bones already and can’t afford any more players to be on the sidelines.