Arsenal got back to winning ways in the Premier League with a hard fought 1-0 win over West Brom on Saturday. We assess the performance from back to front

Arsenal got back to winning ways in the Premier League with a hard fought 1-0 win over West Brom on Saturday. Here, Gunner333 assesses the performance from back to front. 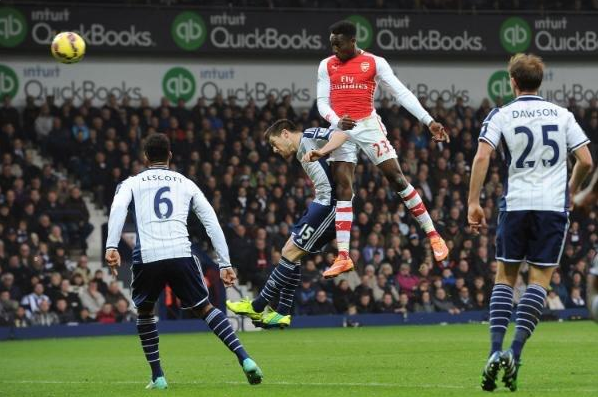 Despite the mid-week win against Borussia Dortmund, Arsenal’s recent league form has been poor following successive defeats so a win against West Brom in the lunch-time kick-off was a must. Laurent Koscielny returned to action after a prolonged absence whilst Olivier Giroud also made his first start since August as Wenger opted to stick Danny Welbeck out on the flank.

Arsenal dominated in possession in the first half but looked reluctant to commit too many forward and as a result the game was left at stale-mate come the close of the first half. Wenger would be frustrated to see his side consistently unable to break the Baggies back-line with that killer final ball.

Cazorla, Giroud, Ramsey and Welbeck all had opportunities to steer the Gunners into the lead but it was the latter and former-United man who finally broke the deadlock. An hour into play and Santi Cazorla drove past his man before unveiling a delectable cross for Welbeck to head home from the edge of the six-yard box.

Alan Irvine’s men pushed for a late equaliser but the Arsenal defence stood firm and saw out the clean sheet and victory. Now back-to-back wins for the Gunners and fortunes are beginning to look like they’re changing.

Here, I shall now analyse the North-London club’s performance in all departments.

It is the first time this season that the defence have received full-marks and they did so purely through excellent organisation. The return of Koscielny in the centre would have settled Arsenal nerves greatly prior to the game and his partnership with big-German Mertesacker looked solid as a rock in this clash.

Calum Chambers saw great amounts of the ball and was keen to push forwards, but tracked-back well and made a number of clearances to deny Albion’s wide-men, while he also did his bit to block a number of attempted crosses.

Generally, Arsenal’s tactic seemed to be to build from the back but with the full-backs not committing themselves too far forward, as we’ve seen in previous weeks. We were far more organised and even with West Brom’s late onslaught, the defence remained focused the task in hand and were strong mentally.

We wouldn’t have won this match had it not been for the performance of the ever-improving Santi Cazorla – who added to an excellent performance in mid-week with a dynamite showing on Saturday. As well as looking innovative in possession, he showed a new physical side with the mini-maestro shrugging off challenges as he drove at the Baggies defence on more than one occasion, and it paid dividends as he set up the winner.

As for the rest of the middle-men, it was all about discipline and doing the simple things correctly. Flamini showed that he is not just a player to hack down anybody he comes into contact with, as he was extremely economical on the ball – executing a Barca-esque pass competition rate of 96%. Aaron Ramsey may not be the Rambo of last season just yet but he worked his socks off on Saturday and gave his all for the team.

Although the Gunners posed a gulf of attacking talents in the final third, only the one chance was put away by the front men. Welbeck operated well on the flank, with Giroud showing good hold-up play through the centre but the Frenchman didn’t really pose any sort of threat in front of goal.

Alexis was surprisingly quiet but that may be down to fatigue, as the Chilean has worked tirelessly for both club and country with very little time for rest in recent weeks. Fortunately, the work-rate was upped by the surrounding attackers and the Gunners came away with the result after defending the lead.