Man Utd will be hoping to continue their recent good run when they take on Stoke at Old Trafford on Tuesday. This is the side we think Louis van Gaal will pick

Manchester United will be hoping to continue their recent good run when they take on Stoke City at Old Trafford on Tuesday night. This is the side we think Louis van Gaal will select:

Goalkeeper: David De Gea has arguably been United’s most consistent player this season and he’s certain to start in goal tomorrow.

Defence: van Gaal’s problems in defence eased slightly with the return of Marcos Rojo at the weekend and the Argentinean is expected to continue alongside Chris Smalling with Phil Jones and Jonny Evans still unavailable. Luke Shaw is out with an ankle injury so Ashley Young may be forced to deputise at left-back once again. Rafael has returned to training but this game may come too soon so Antonio Valencia is set to start at right-back.

Midfield: van Gaal isn’t expected to mess with the side too much after an excellent display sealed a 3-0 win over Hull on Saturday but the Dutchman will be forced into at least one change with Angel Di Maria out due to a hamstring problem. Ander Herrera impressed after replacing the winger on Saturday so the Spaniard could come in from the start tomorrow. Daley Blind remains out so Michael Carrick and Marouane Fellaini should continue in midfield.

Attack: Juan Mata returned to the starting eleven at the weekend and is expected to start once again tomorrow. Robin van Persie answered his critics with a stunning goal against Hull so should have done enough to keep his place which means Radamel Falcao may have to make-do with a place on the bench once again after recovering from a calf injury.

So this is how we think United will line-up against Stoke: 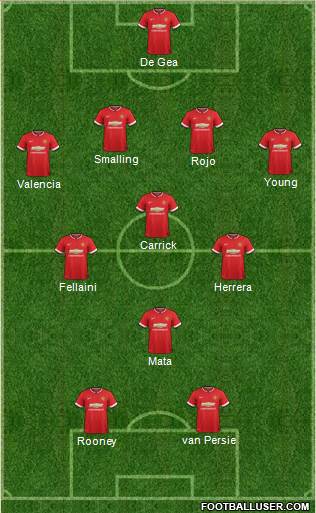