Mario Balotelli has poked fun at former Liverpool striker Luis Suarez after uploading a ‘selfie’ of him pretending to have his arm biting by the serial biter.

Mario Balotelli has poked fun at former Liverpool striker Luis Suarez after uploading a ‘selfie’ of him pretending to have his arm biting by the serial biter.

However, his time at Liverpool was overshadowed by his behaviour on the pitch with the striker banned on two separate occasions for biting an opponent.

The 27-year-old first came under fire after sinking his teeth into Chelsea defender Branislav Ivanovic back in 2013 before inexplicably biting Italy defender Georgio Chiellini during a group stage match at the World Cup in the summer.

Despite the world-wide condemnation for his actions – which led to a four-month ban – Barcelona agreed to pay Liverpool huge money to sign the controversial Uruguayan in July.

Brendan Rodgers brought in Mario Balotelli as Suarez’s replacement but the Italian forward has struggled to fill his boots as he’s managed just one goal following his switch from AC Milan in the summer.

Balotelli has come under fire from some sections of the Anfield faithful for his perceived lack of effort on the pitch at times, so it remains to be seen how they’ll react when they see the image the striker uploaded to his Instagram account earlier this afternoon.

Check it out here:

***UPDATE*** Balotelli has since deleted the post so here’s screenshot: 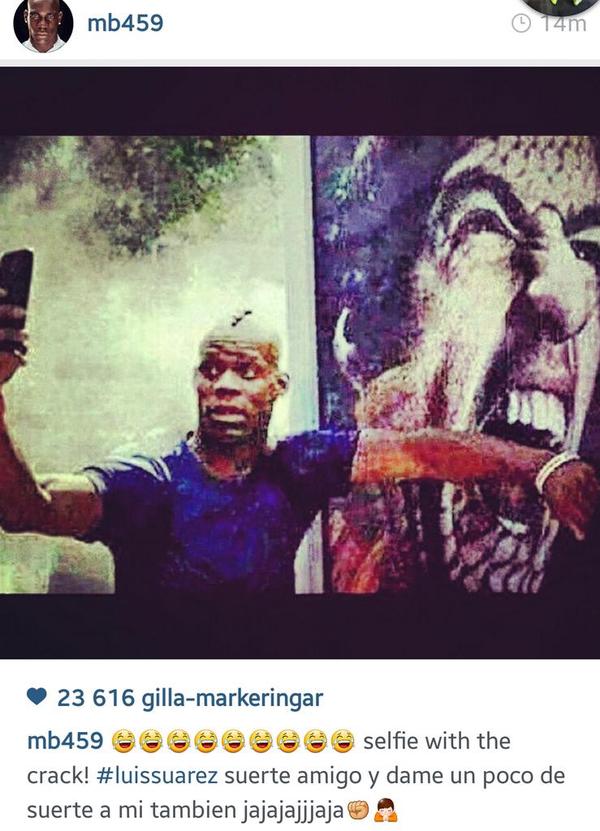