The Premier League have announced the referees for upcoming games involving Liverpool, Chelsea, Arsenal and Man Utd….see who your team will be officiated by

The Premier League have announced the referees for upcoming games involving the likes of Liverpool, Chelsea, Arsenal and Manchester United….see who your team will be officiated by here:

The fixtures are coming thick and fast as we approach the busy festive period and following on from another exciting weekend of Premier League action, we’ve got a rare midweek fixture list to enjoy before matchweek 15 kicks off on Saturday.

Chelsea were held to a 0-0 draw by a spirited Sunderland side on Saturday night and Manchester City took full advantage by cutting their lead at the top of the table to six points after thrashing Southampton 3-0 the following day.

The match at St Mary’s wasn’t without it’s controversies though as referee Mike Jones came under fire for some questionable decisions. The main talking point centered around Sergio Aguero after he was booked for diving even though the City striker was clearly hacked down by  Jose Fonte in the Saints penalty area with the score still at 0-0. Thankfully for City the dubious decision didn’t affect the outcome as goals from Toure, Lampard and Clichy clinched a vital three points.

Arsenal got their season back on track with a hard fought 1-0 win at West Brom thanks to a goal from Danny Welbeck, but the hosts were incensed with ref Chris Foy when striker Saido Berahino was incorrectly flagged for offside with the score at 0-0 in the first half. Had the youngster been allowed to continue clean through on goal, the result may have been very different.

Refereeing decisions like these seem to be talked about more and more these days with the man in the middle playing a key role in deciding the outcome of a game, so it’s no wonder fans are eager to find out who’ll be in charge of their teams upcoming fixtures.

The Premier League have announced the refereeing appointments for the matchweek 15 fixtures to be played this coming weekend, while we’ve also included the details for the midweek games too, so have a look at who’ll be in charge of your team: 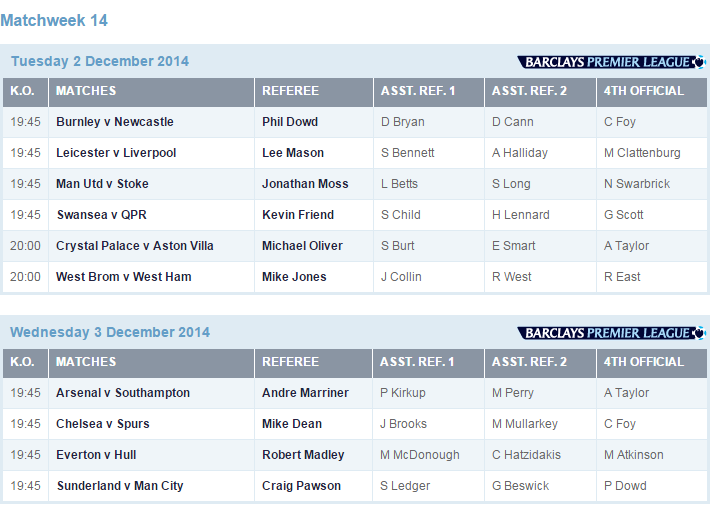 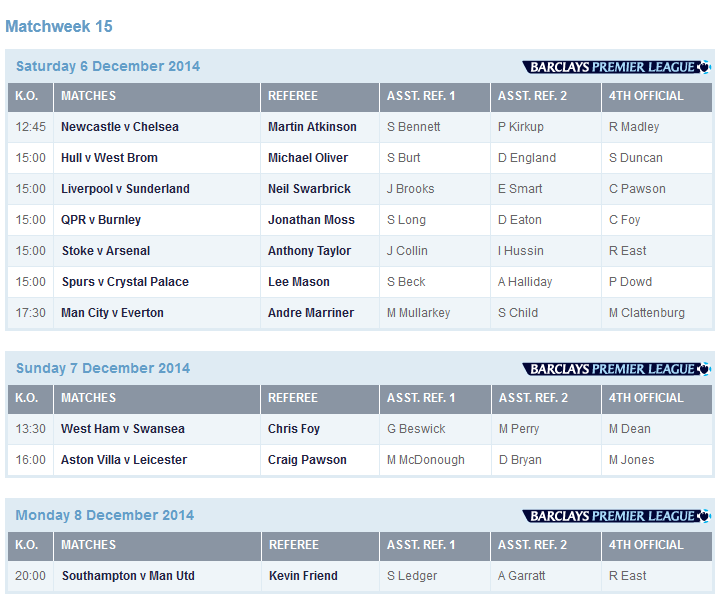