With the January transfer window fast approaching managers are formalising their plans to strengthen their squads ahead of the second half of the season, so we’ll bring you all the latest news and gossip. Today, Manchester United are linked with Diego Godin. 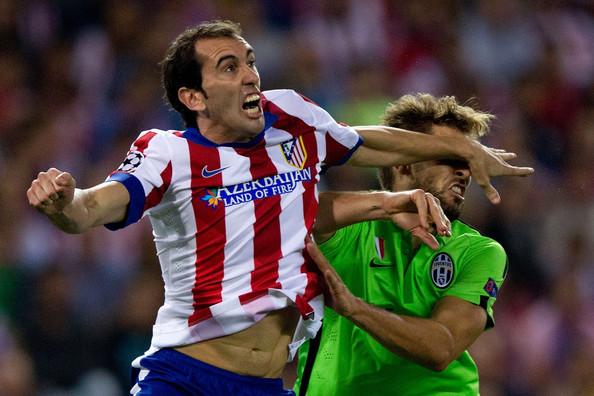 Manchester United are lining-up a move for Atletico Madrid’s €36m-rated centre-back Diego Godin as Louis van Gaal looks to solve his defensive woes in the January transfer window, according to reports.

van Gaal has had to deal with a crippling injury list during his opening few months in the Old Trafford hot-seat with defence a particular area of concerns as Phil Jones, Chris Smalling, Marcos Rojo, Jonny Evans, Rafael and Luke Shaw have all spent long periods on the sidelines.

United’s early season form has been severely affected by the fact that van Gaal has been forced to field a make-shift back-four on several occasions this campaign, so understandably the Dutch boss is keen to strengthen his options at the back this winter.

Many names have been speculated about in the media over the past few weeks and the latest player to be strongly linked is Atletico Madrid’s Diego Godin, with the Mirror one of several outlets who are reporting that United are lining-up a bid for the Uruguayan international.

The newspaper suggests that van Gaal’s top target would be Mats Hummels but with Borussia Dortmund enduring a difficult season in the Bundesliga, they are unlikely to let their skipper go, so he’s turned his attention to Godin.

The 28-year-old joined Atletico from Villareal in 2010 has been a mainstay at the heart of their defence ever since, with the South American playing a key role in Diego Simeone’s side lifting the La Liga title last season.

Godin has been in superb form once again this season with his performances earning him the reputation as one of the world’s top central defenders, and it seems he’s left an impression on the on-looking United scouts who’ve supposedly been in regular attendance this year.

Atletico will be desperate to hang on to him having already lost Diego Costa and Filipe Luis to the Premier League in the summer, but the decision may be taken out of their hands as the Mirror suggest that United could activate his €36m (£28.5m) buy-out clause and lure him to Old Trafford this winter.

There’s no doubt United could benefit from bringing in a dominant central defender and Godin would fit the bill nicely, so I’m sure United fans will be hoping these reports are accurate and van Gaal makes a serious play for his services in January.