Arsenal will be hoping to make it back-to-back victories when we take on Southampton at the Emirates tonight. This is the side I think Arsene Wenger will select

Arsenal will be hoping to make it back-to-back victories when we take on Southampton at the Emirates on Wednesday night. This is the side I think Arsene Wenger will select:

Goalkeeper: Wojciech Szczesny is still out with the hip injury that he suffered against Manchester United and with David Ospina a week away from being in contention, young Emiliano Martinez will continue to deputise between the sticks.

Defence: We have some doubts in defence with Kieran Gibbs and Nacho Monreal both facing late tests. Monreal took part in training today so it looks like he could be in contention. If he misses out then Hector Bellerin could fill-in at left-back. Laurent Koscielny made a successful return to action at the weekend so should continue his partnership with Per Mertesacker at the back.

Midfield: Jack Wilshere is out for the foreseeable future and with Mikel Arteta also missing, Mathieu Flamini and Aaron Ramsey will have to start in midfield. Santi Cazorla played in a more central role against West Brom and was excellent so we should see him retain his position.

Attack: Alex Oxlade-Chamberlain would most likely have started tomorrow night had he not picked up an ankle knock at the weekend. The youngster could yet pass a late fitness test but if he misses out, I think we’ll see Arsene Wenger stick with the same front three that played at West Brom with Alexis Sanchez and Danny Welbeck playing off Olivier Giroud. Theo Walcott and Mesut Ozil are still unavailable.

So this is how I think Arsenal will line-up against Southampton: 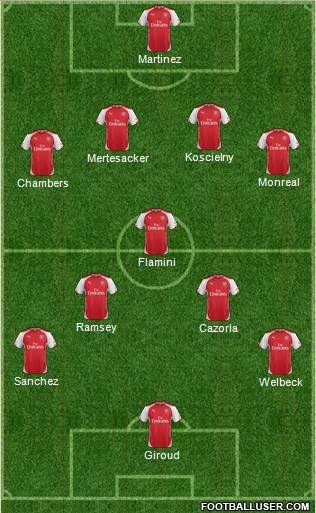