Arsenal take on Stoke City at the Britannia tomorrow. Here is a preview with team news, likely line-ups, predicted score and betting tips for the game.

Arsenal will be looking to make it three league wins in a row when we take on Stoke City at the Britannia Stadium tomorrow afternoon.

We head into the game off the back of successive 1-0 wins over West Brom and Southampton with Alexis Sanchez hitting a last minute winner to see-off Ronald Koeman’s side in midweek.

Those wins stopped the rot after defeats to Swansea and Manchester United and we now sit sixth in the Premier League table, just three points off third place, so hopefully we can pick up another win tomorrow and move into third spot ahead of Southampton’s clash with United on Monday night.

It’s not going to be easy though as Stoke is traditionally a tough place for Arsenal to visit and Ryan Showcross has already warned we’ll face another hostile atmosphere this weekend.

The Potters are going to be seeking to end a three-game losing streak with their latest loss coming at Old Trafford in midweek, so Mark Hughes will be eager to get back on track and put some distance between them and the drop zone with his side just three points clear in 13th place.

Arsene Wenger has mounting injuries worries to contend with going into the game with several players facing late fitness tests.

Nacho Monreal has been ruled out with a knee injury but Kieran Gibbs should return from a minor hip injury to take his place at left-back.

Wojciech Szczesny trained for the first time in two weeks today so could be back in contention, but he’ll have a hard job displacing Emiliano Martinez with the youngster keeping three clean sheets in his three starts during the Pole’s absence.

Theo Walcott remains out with a groin injury so he joins Mesut Ozil, Jack Wilshere, Abou Diaby, Mikel Arteta and David Ospina on the sidelines

Wenger will make a late decision over whether to hand Laurent Koscielny his third start in a week as he continues to monitor the defenders troublesome Achilles injury.

Mathieu Debuchy is back in full training but this game comes too soon for the Frenchman, while Tomas Rosicky and Yaya Sanogo are doubts with thigh and calf injuries.

Stoke also have a few injury concerns to deal with. Jonathan Walters is a major doubt after picking up a knee injury while Robert Huth will face a late test on a calf problem.

Stephen Ireland is expected to miss out through illness so he could join Steve Sidwell, Victor Moses, Dionatan Teixeira and Peter Odemwingie on the sidelines. 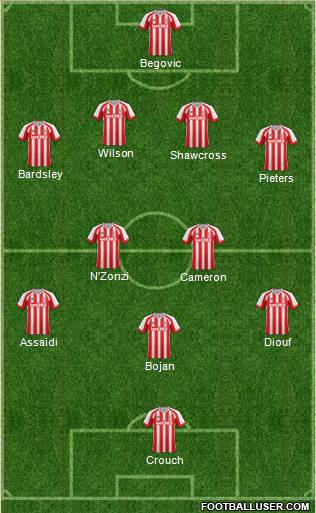 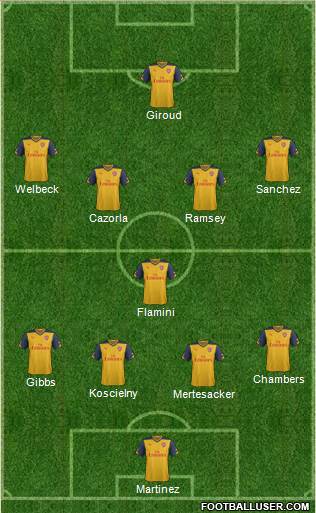 Stoke 0-1 Arsenal: Our recent record away at Stoke is poor having won just once in our last eight meetings in all competitions, but we’ve looked a far more solid unit of late and with talents like Sanchez in the side, I think we can nick the odd goal, so I think we’ll sneak another narrow 1-0 win tomorrow.

Despite our record against them, Arsenal are the favourites to pick up three points tomorrow at odds of 21/10 with Betfair. The Reds to win 1-0 is on offer at 15/2 and I fancy Olivier Giroud to get the winner at 5/1, so if we combine those bets in a scorecast then we get very tempting odds of 20/1. Surely that’s got to be worth a couple of quid!?