Arsenal will be looking to get their season back on track when they face Newcastle at the Emirates on Saturday. Here is the side I think Arsene Wenger will pick

Arsenal will be looking to get their season back on track when they take on Newcastle at the Emirates on Saturday evening. Here is the side I think Arsene Wenger will select:

Goalkeeper: Wojciech Szczesny was reinstated in goal against Galatasaray after missing the last four games with a hip injury so I think we’ll see the Pole continue between the sticks this weekend. David Ospina is back in training so it will be interesting to see if he beats Emi Martinez to a spot on the bench.

Defence: We have some real problems in defence as Arsene Wenger has confirmed that Laurent Koscielny has been ruled out with a calf injury that’s already seen him miss our last two games. Calum Chambers is suspended following his sending off against Stoke last week so Wenger could move Mathieu Debuchy into the middle alongside Per Mertesacker with Hector Bellerin moving to right-back and Keiran Gibbs coming back in on the left.

Midfield: Aaron Ramsey faces a late fitness test on a hamstring injury that forced him off at half time in midweek but I think we’ll see the Welshman come through. Mathieu Flamini is also expected to shake-off a minor knock while Santi Cazorla should be restored to the side after being rested in midweek. Jack Wilshere and Mikel Arteta remain unavailable.

Attack: Alexis Sanchez is almost certain to be restored in attack after being left back in North London for the trip to Turkey, while I think we’ll also see Danny Welbeck and Olivier Giroud brought in after they too were rested on Tuesday night. Alex Oxlade-Chamberlain was excellent against Galatasaray but I think the boss with give him a breather while Lukas Podolski may think himself unlucky to miss out after his goal-scoring exploits last time out.

Here if how I think we’ll see Arsenal line-up: 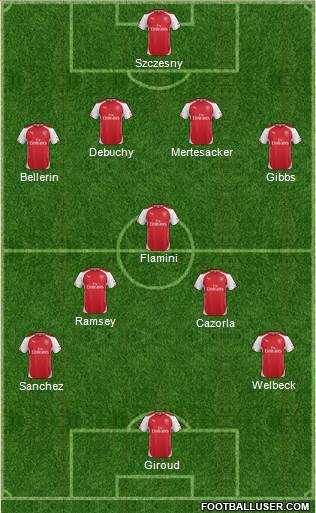