Man Utd entertain Liverpool at Old Trafford on Sunday. Here is a preview with team news, likely line-ups, predicted score and betting tips for the game.

Manchester United will be looking to make it six wins on the bounce when they take on rivals Liverpool at Old Trafford on Sunday afternoon.

The Reds Devils have recovered from a poor start and have catapulted up the Premier League table after recording consecutive victories over Crystal Palace, Arsenal, Hull, Stoke and Southampton in recent weeks.

United head into tomorrow’s game sitting third in the table so Louis van Gaal will be keen to cement their place in the top four with a win over one of their closest rivals for Champions League qualification.

Liverpool arrive at Old Trafford seven points adrift of United in ninth place following last weekend’s disappointing 0-0 draw at home to Sunderland and they crashed out of the Champions League in midweek after being held by FC Basel to a 1-1 draw at Anfield.

Therefore, Brendan Rodgers will be desperate for his side to bounce back with a positive result tomorrow to keep alive their hopes of being back in Europe’s premier competition next season.

United have received a blow ahead of the game with Angel Di Maria ruled out after failing to recover from a hamstring injury that’s already kept him out for two games.

Rafael and Phil Jones are back in training but it remains to be seen whether they’ll be considered fit enough to return to the squad after such long periods on the sidelines.

Jonny Evans could make his long-awaited first team comeback with the Northern Irishman expected to step in for Chris Smalling after he picked up a hamstring problem against Southampton on Monday night.

Liverpool welcome back striker Mario Balotelli after he recovered from a groin injury and he could replace Rickie Lambert up front with the 32-year-old needing a rest after deputising in recent weeks.

Adam Lallana is also fit despite breaking ribs against Leicester City 10 days ago and Kolo Toure is expected to come back in to the side after recovering from a minor groin injury that kept him out against Basel. 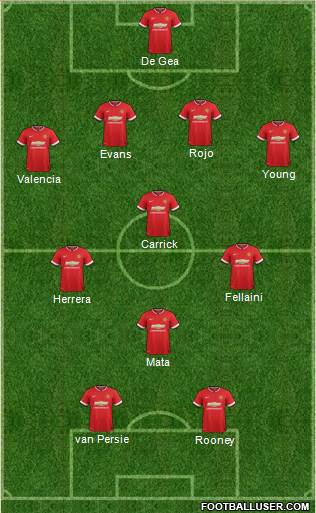 Man Utd 2-1 Liverpool: These games are always fiercely competitive and form usually goes out the window, but Liverpool have been extremely poor of late and with United full of confidence off the back of their excellent run, I think we’ll see a narrow home win here.

Man Utd are favourites to win the game tomorrow and new customers can get enhanced odds of 5/1 on a home win with Betfair while a 2-1 win is on offer at 17/2. Robin van Persie has been back among the goals recently so I fancy him to open the scoring at odds of 11/2, and if we combine that with a 2-1 win in a scorecast then we get very tempting odds of 31/1. Surely that’s got to be worth a couple of quid!?