Chelsea take on Derby County in the quarter final of the Capital One Cup tonight. Here’s a preview with team news, line-up, predicted score and betting tips.

Chelsea will continue their march towards a historic quadruple when they take on Derby County in the quarter final of the Capital One Cup tonight.

The Blues needed a late goal to edge past League Two side Shrewsbury Town 2-1 in the last round so Jose Mourinho will be looking for an improved display this time around.

But that victory kept Chelsea in all four competitions this season, and with the West Londoners holding a six point lead in the Premier League and one of the favourites to lift the Champions League, they’re still on course to complete an unlikely quadruple.

Derby come into the game sitting third in the Champions table despite Saturday’s disappointing loss at Middlesbrough and they eased into the last eight in the League Cup thanks to a 5-2 win over Fulham.

Steve McClaren’s side have an excellent home record this season with the Rams losing just once at Pride Park, so they are likely to give Chelsea a tough test this evening.

Mourinho has promised to field a strong side and the only first team regular certain to be rested is Gary Cahill with Kurt Zouma a confirmed starter at the back.

Petr Cech is expected to keep his place in goal to give Thibaut Courtois more time to recover from a minor muscular injury while Cesar Azpilicueta should come back in at right-back to give Branislav Ivanovic a breather.

Cesc Fabregas returns form a one-match ban and should partner Nemanja Matic in midfield while Andre Schurrle could start ahead of Willian in attack.

Diego Costa is back to full fitness but Mourinho may take this opportunity to rest the Spaniard ahead of a busy festive period, so Didier Drogba and Loic Remy will fight it out to start up front.

Derby will have to make-do without Ryan Shotton after he was sent off on Saturday but otherwise they have no fresh injury worries to contend with. 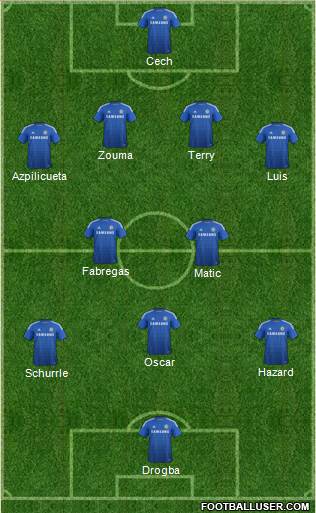 Derby 0-2 Chelsea: If Mourinho follows through with his promise to field a strong side, then I just don’t see Derby being able to stop Chelsea winning this game. Even by rotating two or three players, the Blues should still have way too much for them to handle.

Chelsea are understandably the heavy favourites to qualify tonight but new customers can get enhanced odds of 4-1 on Chelsea winning in normal time with Betfair. A 2-0 win for the Blues is on offer at 15/2 while our other tip is Eden Hazard to open the scoring at 6/1, and if we combine those two bets in a scorecast, then we get very tempting odds of 28/1. Surely that’s got to be worth a couple of quid!?