Tottenham will be looking to book their place in the last four when they take on Newcastle in the Capital One Cup on Wednesday. Here is our predicted team.

Tottenham will be looking to book their place in the last four when they take on Newcastle in the quarter final of the Capital One Cup on Wednesday night. Here is the side I think Mauricio Pochettino will select:

Goalkeeper: Pochettinho is expected to make wholesale changes which is likely to see Hugo Lloris drop out with Michel Vorm starting in goal.

Defence: Danny Rose was left out against Swansea on Sunday so he should come back in for Ben Davies at left-back while Kyle Naughton has been passed fit to start on the right. Vlad Chiriches and Younes Kaboul could be recalled after losing their places to Jan Vertonghen and Federico Fazio in recent weeks.

Midfield: Benjamin Stambouli has been eased into action following his summer move and he could get another taste of first team football tomorrow with a start alongside Moussa Dembele in midfield. That would hand youngsters Ryan Mason and Nabil Bentaleb a breather.

Attack: The likes of Christian Eriksen and Harry Kane could be rested which may see Andros Townsend and Nacer Chadli recalled to the starting eleven after being on the bench at the weekend. Paulinho has been used sparingly of late so the Brazilian may get a rare start while Roberto Soldado should keep his place up front with Emmanuel Adebayor only just returning to training following a trip back to Togo on compassionate leave. 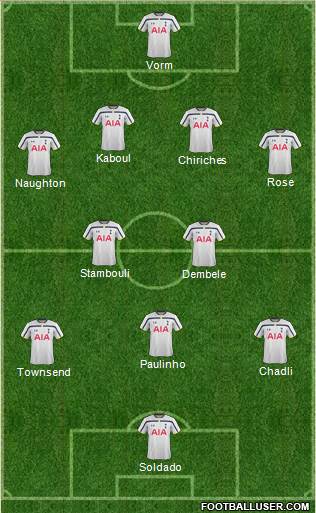