Arsenal edged past Queens Park Rangers 2-1 at the Emirates on Friday despite being reduced to 10-men shortly after half time. Here is an analysis from Gunner333

Arsenal edged past Queens Park Rangers 2-1 at the Emirates on Friday despite being reduced to 10-men shortly after half time. Here is an analysis from Gunner333. 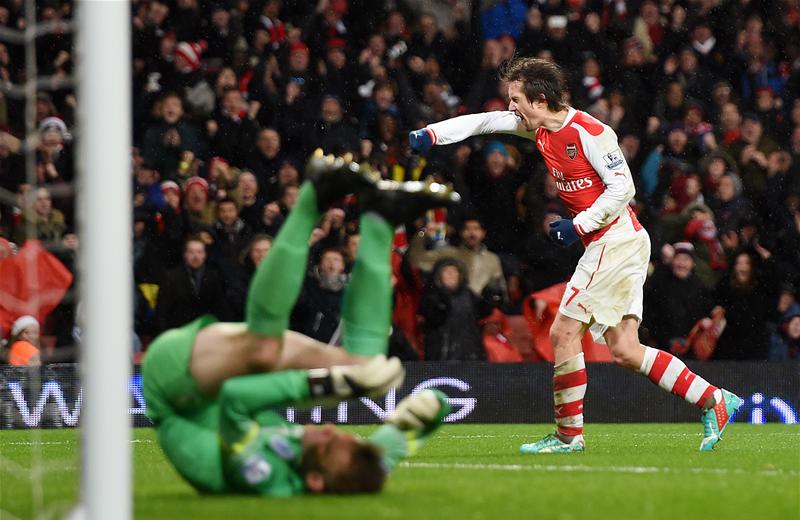 In the penultimate game of the season’s first half, Arsenal welcomed Harry Redknapp’s QPR to the Emirates for a festive Boxing Day clash. Tomas Rosicky made a rare start while Nacho Monreal resumed his role as make-shift centre-half, as Mathieu Debuchy returned to full-back.

Arsenal began the brighter of the two and were awarded a penalty inside ten minutes, which Sanchez earned, took and saw saved by Rob Green. The Englishman following the former Barca-man’s spot-kick to the left after Traoré had lunged in on he Chilean in the box.

Less than ten minutes to the half-time interval though and Sanchez amended his aforementioned miss with a close range header coming courtesy of Gibbs’ drilled cross. A Christmas cracker for Wenger’s men who took the lead moments before the break.

Just seconds later and QPR nearly equalised with their first real effort of the half, Caulker’s header incredibly close to the right-hand post from 12 yards. Heading into the break though, the Gunners were on top and would be satisfied.

The first talking point of the second half would be a sending off. Olivier Giroud exhibited a great lack of professionalism, responding with a head-butt to Onuoha’s nudge. Arsenal down to ten with well over 30 minutes left to play.

Any doubts over the ten-men seeing the game through were swept away when Rosicky capped off an excellent evening’s work with a well-taken second. Sanchez repaying the favour for the first, gliding past two defenders and setting up the Czech through the centre, whose effort deflected through Green for 2-0.

Charlie Austin may have bagged a late consolation from the spot, but Wenger’s men held on to supply their fans with a late Boxing Day treat and reclaim sixth spot in the table, heading into the half-way point.

Here I shall now analyse Arsenal’s display from back-to-front:

Aside from Austin’s presence, QPR provided little threat up-top and, no disrespect, but what does one expect from a side flirting with the relegation zone? All that said, the Arsenal back-line still needed to remain tight and not leak chances, which they generally did.

Far more composed in the air than any other showing this season, Mertesacker remained a solid favourite to win the majority of headers, whilst the organisation at corner kicks was especially pleasing to see. Monreal was also once again a key component to the back-line and the Spaniard showed bravery with a number of late last-ditch challenges.

Rather dubious was the awarding of the penalty and Debuchy can feel a little aggrieved as he got a touch on the ball but Gibbs was a little fortuitous in his challenge on Zamora, which easily warranted a late penalty.

Forever the embodiment of the status quo, Matthieu Flamini etched out a middle-order performance, looking far more comfortable in dictating play than his shy display at Anfield pre-Christmas. The Frenchman was clockwork in turning defence to attack and had great attacking options ahead of him.

One of these being the returning Rosicky who was incredibly dynamic and showed how valuable an asset he is, playing brilliantly after a lengthy absence from the first-team frame. Tommy converted a great goal and was generally exciting in his movement across the front-line, bringing a new weapon to the Arsenal armoury with his pin-point passing.

After a real slump in quality against Liverpool last time out, Arsenal had the slight advantage in possession stats and maintained a good hold of the ball in the final third to tire QPR legs and potentially supply Wenger’s men with that added incentive to kill the game off.

Sanchez alone scored full marks with an emphatic display as, despite missing the penalty early on, he chalked up a goal and assist, looking  impressive and lively in between the two.

Unfortunately, the attacking unit is not compiled of just Sanchez and one front-man in particular could have cost us. Olivier Giroud’s impetulance was greatly documented in his head-butt on Onuoha and the lack of the Frenchman’s presence up-top could have been very damaging on another day. Fortunately the result still came to fruition and Olivier is not a regular trouble-maker so can perhaps this can be overlooked on this occasion, although he will be missed for the next three games.

Welbeck worked hard and got nothing in return yet again but his movement off the ball distracts and opens up space for our other men, while he does chip in with the odd moment of magic and was an important part of this victory.

So three points in the bag and perhaps Boxing Day could be the turning point in Arsenal’s season, as Wenger’s men vie to put pressure on the top four. Thanks for reading and fell free to comment below!