Arsenal will begin the defence of the FA Cup when they take on Hull at the Emirates on Sunday afternoon. Here is the side I think Arsene Wenger will select:

Arsenal will begin the defence of the FA Cup when they take on last years finalists Hull City at the Emirates on Sunday afternoon. Here is the side Gooner Mac thinks Arsene Wenger will select:

Goalkeeper: The boss has already confirmed that David Ospina will start in goal with Wojciech Szczesny dropping out after his horror-show at Southampton.

Defence: The defence hardly covered themselves in glory on Thursday either and we could see a couple of changes at the back. Kieran Gibbs is likely to make way with Nacho Monreal starting at left-back while Calum Chambers or Hector Bellerin should start at right-back allowing Mathieu Debuchy a well-earned rest. Laurent Koscielny has only recently returned to action so as long as he hasn’t suffered any ill-effects from playing two games in quick succession, I think we’ll see him start alongside Per Mertesacker again.

Midfield: Arsene has very few options to rotate in the middle of the park as Mikel Arteta, Jack Wilshere and Aaron Ramsey all remain unavailable through injury. Francis Coquelin has performed well over the course of the last two games and I’d expect him to continue in midfield while Mathieu Flamini should return from a minor knock. Tomas Rosicky struggles to play two games in a short space of time so Alex Oxlade-Chamberlain could start in a more central position.

Attack: Theo Walcott is pushing for a start after playing 30 minutes on Thursday. He looked off the pace but we need to get him back up to speed quickly and the best way to do that is to give him playing time. Ideally we’d rest Santi Cazorla but with Lukas Podolski set for a loan move to Inter Milan and Mesut Ozil still unavailable, we don’t have too many alternatives. Olivier Giroud serves the final of his three game ban but Danny Welbeck could recover from a minor knock to start up front which would allow Alexis Sanchez to finally get a breather. 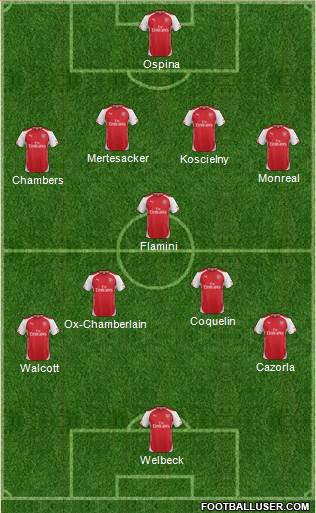