Man Utd will be looking to avoid an upset when they face Yeovil in the 3rd round of the FA Cup on Sunday. Here is the side we think Louis van Gaal will select:

Manchester United will be looking to avoid an upset when they take on Yeovil Town in the third round of the FA Cup on Sunday. Here is the side we think Louis van Gaal will select:

Goalkeeper: David De Gea has been United’s most consistent performer this season and I highly doubt van Gaal will leave him out, even against lower league opposition.

Defence: The Dutch coach has gone with three at the back of late and it looks like he’ll continue to do so again on Sunday. Marcos Rojo is close to making his comeback but this weekend may come too soon so Chris Smalling could continue alongside Phil Jones and Jonny Evans at the back.

Midfield: Wayne Rooney has been deployed in midfield lately but I think we might see him move further forward with Ander Herrera coming in to start alongside Michael Carrick in midfield. Marouane Fellaini is still out with a rib injury so he joins Daley Blind on the sidelines with the Dutchman likely to miss out, despite returning to training recently. Ashley Young is expected to be out for at least two weeks with a hamstring injury so Rafael could start on the right wing with Luke Shaw keeping his place on the left.

Attack: Angel Di Maria is back in training and could make the squad, although I think we’ll see him used as a substitute after recovering from a thigh injury. Juan Mata could be given a breather which could see Adnan Januzaj start in attack with Rooney back playing up front. The skipper could be joined by youngster James Wilson if van Gaal decides to give Radamel Falcao and Robin van Persie a rest. 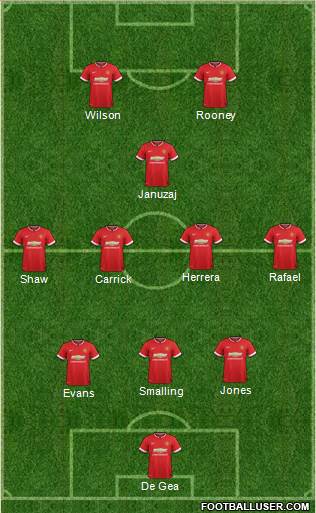