Arsenal are lining-up a sensational £64m move for a Spanish international and hope to fend off interest from Liverpool and Chelsea. Find out who the player is..

With the January transfer now open for business, managers are working hard to strengthen their squads ahead of the second half of the season, so we’ll bring you all the latest news and gossip. Today, Liverpool and Chelsea target, Isco, is linked with Arsenal…. 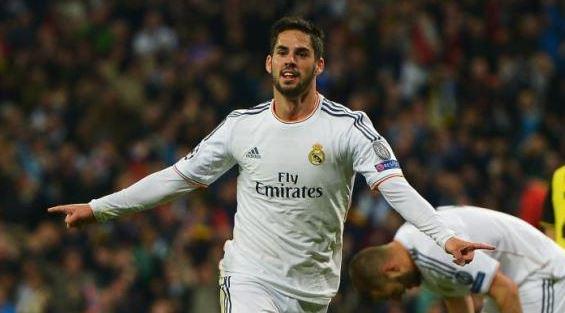 Arsenal are understood to be lining-up a shock move for Real Madrid attacker Isco and hope a sensational £64m bid will be enough to fend off interest from the likes of Liverpool and Chelsea, according to reports.

Isco joined Madrid in 2013 after two excellent years at Malaga but his time at the Bernabeu hasn’t gone according to plan as he’s found it difficult to force his way into Carlo Ancelotti’s starting eleven on a regular basis.

The Spanish international has managed 47 La Liga appearances – scoring 10 goals in the process – but many of those have come from the substitutes bench with the likes of Cristiano Ronaldo, Gareth Bale and James Rodriquez all ahead of him in the pecking order.

The 22-year-old’s bit-part role has led to speculation he could be on the move and understandably he’s attracting interest with reports suggesting that Arsenal and Chelsea are keen to offer him a fresh start in England, while the likes of Liverpool and Manchester City are also understood to be keeping a close eye on his situation.

However, it looks as though the Gunners could be ready to blow their rivals out the water as, according to the Daily Star, Arsene Wenger has made Isco one of his top January targets and is lining-up a sensational £64m bid this month.

The newspaper suggests that Arsenal chiefs are confident they could lure Isco away from Spain and I don’t think there’s any doubt that the European champions would be tempted to cash in for £64m, as it would represent a huge return on their investment for a fringe player.

If this report is accurate, and that’s a big ‘if‘, and the North Londoners were able to pull it off, then the deal would smash the British transfer record and be Arsenal’s second huge transfer deal involving Madrid after paying them £42.5m for Mesut Ozil 18 months ago.

Isco would obviously be a superb addition to any squad as he’s an excellent player and Wenger may hold an interest if he’s looking to replace Lukas Podolski – who joined Inter Milan on loan last weekend. However, I would be SHOCKED if the French boss was prepared to spend £64m on another attacker as he has far greater priorities to sort out first.

Arsenal are in desperate need of a centre-back and holding midfielder so you’d think Wenger would be utilising his transfer funds to fill those problem areas rather than splashing out record fees on the likes of Isco, but stranger things have happened in football i suppose……