Arsene Wenger has given an update on Mathieu Debuchy after he was forced off during today’s 3-0 win over Stoke, while he also gave an update on Kieran Gibbs. 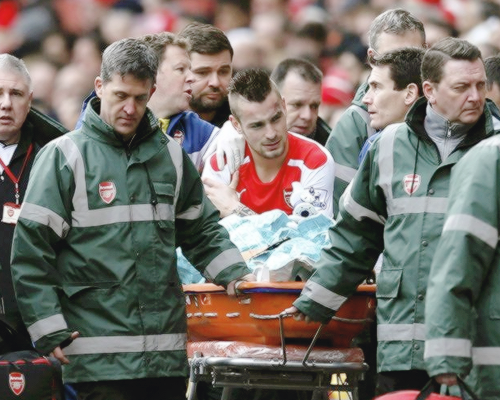 Arsenal boss Arsene Wenger has confirmed that Mathieu Debuchy is facing a spell on the sidelines after suffering a dislocated shoulder during today’s 3-0 win over Stoke.

Debuchy lasted only 13 minutes at the Emirates this afternoon after being sent sprawling to the ground following an unnecessary shove from Stoke attacker Marko Arnautovic.

The French defender fell awkwardly and clattered into the advertising boards, and was replaced by Hector Bellerin after receiving several minutes of treatment by the Arsenal physios.

Speaking to the press after the game, Arsene Wenger confirmed that Debuchy has suffered a dislocated shoulder but they won’t know how long he’ll be out for until he sees a specialist.

The boss also revealed that Kieran Gibbs was unable to feature today as he’s still nursing an inflamed ankle.

“He has a dislocated shoulder. It’s difficult – you need a diagnosis from a specialist. We don’t know yet but he will certainly not play next week.

It’s a huge blow to lose Debuchy and a dislocated should is likely to keep him out for at least 6-8 weeks. Hopefully the specialist will give us some good news though, and the injury may not be as bad as first feared. Fingers crossed.

It sounds like Gibbs could also be struggling to make next weeks clash with Manchester City, but thankfully we’ve got Nacho Monreal to call upon. The Spaniard was solid again today and is a reliable defender.