Arsenal Sweating On Scan Results As Player Faces 3 Months Out 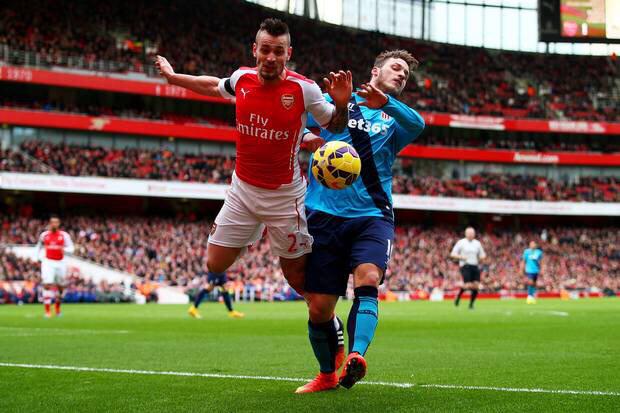 Arsenal are sweating on the results of Mathieu Debuchy’s scan results as the defender will be ruled out for 3 months if his dislocated shoulder requires surgery, according to reports.

Debuchy was forced off early on during our 3-0 win over Stoke on Sunday after dislocating his right shoulder following a cynical shove from Marko Arnautovic as the pair chased down a loose ball on the touchline.

The French defender was eventually stretchered from the field after receiving lengthy treatment and he’s now due to see a specialist in the next 24 hours to have scans which will determine how long he’ll be out for.

Arsenal medical staff hope the injury isn’t serious and wont require surgery, which means Debuchy should be back in around six weeks. However, if the scans show he’ll need to go under the knife, then the full-back is facing another three months on the sidelines.

That would be a huge blow as the former Newcastle man has only recently returned to action after missing the first half of the season with an ankle injury, so fingers crossed he won’t need to have more surgery.

Either way, we’re set to lose Debuchy for at least six weeks which once again leaves us short of options in defence and increases the pressure on Arsene Wenger to dip into the transfer market.

The boss is expected to bring in another experienced centre-back but ideally the player he goes for could cover at right-back to give us another option other than the inexperienced duo of Hector Bellerin and Calum Chambers.