Manchester United will look to get back on track when they take on Queens Park Rangers on Saturday afternoon. Here’s the side we think Louis van Gaal will pick

Manchester United will look to get back on track when they take on Queens Park Rangers on Saturday afternoon. Here is the side I think Louis van Gaal will select:

Goalkeeper: David De Gea has been United’s most consistent performer this season so there’s no chance van Gaal will leave him out.

Defence: The Dutch coach could shuffle things around at the back though following last weeks defeat to Southampton and he may decide to revert to a flat back four this time around. Rafael is back in contention after surgery on a fractured cheekbone so he could start at right-back with luke Shaw on the left. Jonny Evans may get a recall at centre-back with Chris Smalling perhaps farourite ahead of Phil Jones to partner him. Marcos Rojo is back in full training after missing eight games through injury but he may be eased back into action slowly.

Midfield: Daley Blind made his comeback from seven weeks out with a knee injury last week and the Dutchman may be moved into midfield to start alongside Michael Carrick this weekend. Angel Di Maria is certain to keep his place which means the likes of Marouane Fellaini and Ander Herrera may have to make-do with a place on the bench.

Attack: Robin van Persie is a major doubt after picking up an injury last week so Radamel Falcao is likely to get a recall having been axed from the squad last time out. The Colombian is expected to start alongside Wayne Rooney up front with Juan Mata in the ‘hole’ behind the front two. 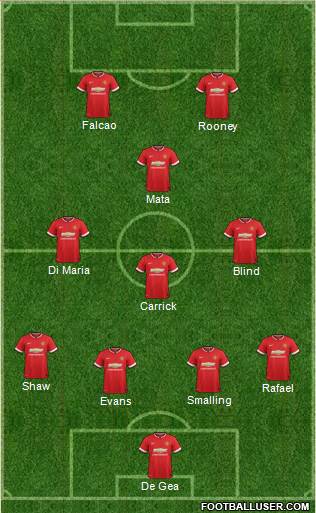