Arsenal are closing in on another youngster after Czech starlet Martin Graiciar confirmed he’s due to fly over to London to have a medical with the Gunners.

With the January transfer now open for business, managers are strengthening their squads ahead of the second half of the season, so we’ll bring you all the latest news and gossip. Today, Arsenal are closing in on a Czech youngster…. 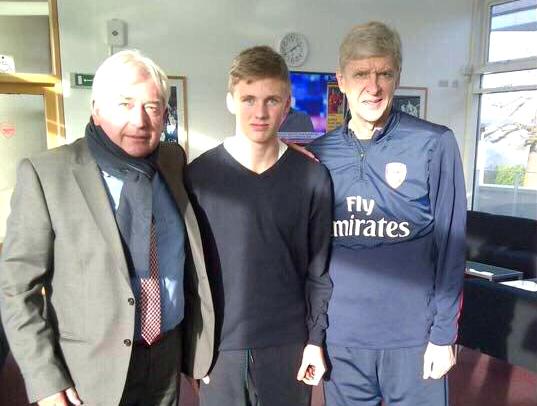 Arsenal appear to be closing in on another youngster after Czech starlet Martin Graiciar confirmed he’s due to fly over to London this weekend to have a medical with the Gunners.

Graiciar is a name some may remember from last year when we were linked with a move for the talented teenager back in February, but a deal failed to materialise as we were unable to agree terms with his current club, Viktoria Plzen.

However, it looks as though Arsene Wenger has now renewed his interest as the 15-year-old has taken to his Facebook page to confirm that he’s due to fly over to London on Saturday to undergo a medial with Arsenal.

The young striker has just taken his post down, but as you can see from the screenshot below, he claimed he’ll undergo a two-week trial with us where he’ll train with the first team and play for the Under-16’s against West Ham and Southampton. 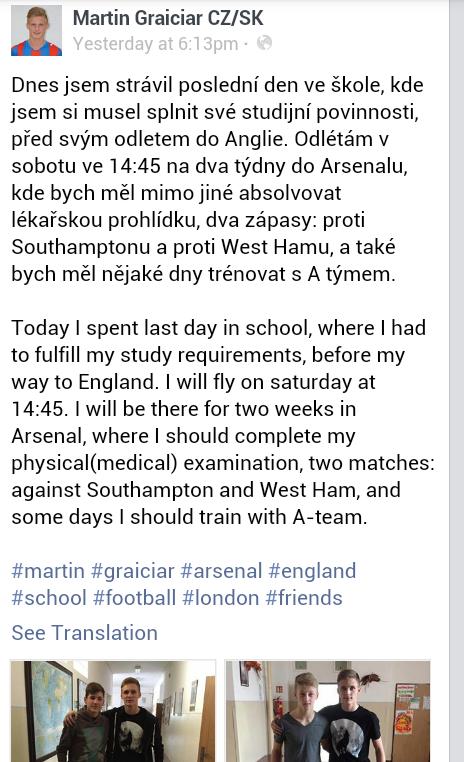 It’s not entirely clear what will happen after the initial two-week trial but there are reports suggesting that the move is in fact a permanent one, so we may have already agreed terms with Plzen to sign the youngster if he impresses during his trial.

Graiciar is predominantly a striker but can also play out wide and he’s attracted interest from a whole host of top European clubs including Chelsea and Real Madrid over the past months.

We’ll have to await further news on how the trial went but it appears Arsenal could be set to close out a deal for another teenager having agreed a fee with Legia Warsaw for Polish midfielder Krystian Bielik, with Arsene Wenger confirming that the 17-year-old was already in London to undergo his medical today.

Hopefully the boss will now turn his attention to bringing in a couple of more experienced players, particularly after Mikel Arteta and Mathieu Debuchy were ruled out for three months through injury.