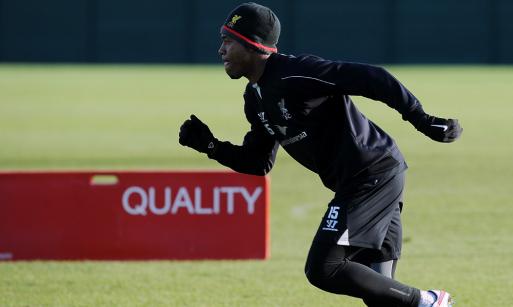 Liverpool welcome Premier League leaders Chelsea to Anfield on Tuesday night for the first leg of their Capital One Cup semi final tie.

Ahead of the game, Brendan Rodgers has been speaking to the media at his pre-match press conference this afternoon and gave Liverpoolfc.com a team news and injury update.

The Reds boss gave the latest on the fitness of Daniel Sturridge with the striker now back at Melwood training with the first team after nearly four months out through injury.

The 25-year-old hasn’t featured since the win over Tottenham in late August but Rodgers has confirmed he’s progressing well during the final stages of his rehabilitation and he should be back in contention by the end of the month.

“It has obviously been very difficult for us, because he is a top-class player and he has been out since August,” Rodgers told Liverpoolfc.com

“But he is working very hard on his rehab and we’re hoping that somewhere near the end of this month he should be back. He is back here in the final stages of that and doing very well.”

Rodgers also gave an update on Jon Flanagan. The young defender has yet to make a single appearance this season due to an on-going knee injury but it looks like there’s light at the end of the tunnel and the versatile full-back could be available again soon.

“It has been difficult for Jon, because he was brilliant for us last year. He was absolutely superb. It is just unfortunate he has picked up this injury.

“He has been out for a little while. But we’re hoping that in time, in the near future, he’s going to be back fit and playing because he’s a very important young player for us.”

It’s obviously going to be a huge boost when Sturridge returns for Liverpool as he’s been sorely missed these past few months. The Merseysiders will continue to be cautious with him and won’t rush him back but as long as he continues to progress well, he could feature in the second leg of the league cup at Chelsea on the 27th, or failing that he should be in contention when West Ham come to Anfield on the 31st.

Flanagan’s loss hasn’t really been talked about much but he was a regular performer at left-back during the second half of last season so it will be interesting to see if and where he fits in to Rodgers plans once he’s fit again.

But neither player will be in contention to face Chelsea tomorrow night and Rodgers gave no word on Steven Gerrard after he missed the win at Aston Villa with a minor hamstring injury, but the skipper is expected to be back in the squad on Tuesday.

Glen Johnson is close to a comeback from a groin strain while Mario Balotelli missed the trip to Villa Park on Saturday with illness – even though he was spotted out on the town at the weekend.