Arsenal produced a magnificent display to beat Manchester City 2-0 at the Etihad on Sunday afternoon. Here, Gunner333 gives us 4 positives from the performance

Arsenal produced a magnificent display to beat Manchester City 2-0 at the Etihad on Sunday afternoon. Here, Gunner333 gives us 4 positives from the performance… 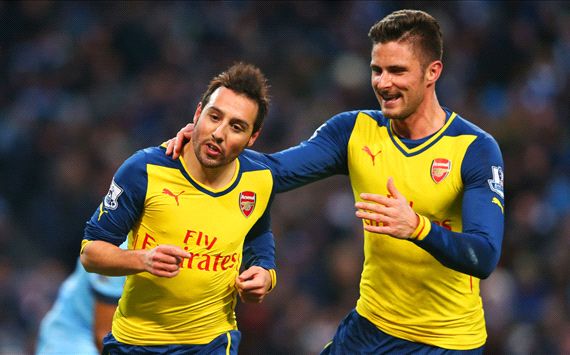 Eager to narrow the gap between themselves and Man United, Arsenal prepared for a tough clash with the blue half of Manchester, where a win would bring them within a point of fourth place.

A great indicator of Arsenal’s success in this game would be the ability to keep tabs on a lethal City attack, lead by one Sergio Aguero. Despite the hosts’ lion-share of possession, the Gunners blunted this front-line well and the match was in balance in the early stages.

Masses of ball possession with nothing to show for it sparked great frustration in the City camp and it was evident before the half-hour mark, as Vincent Kompany body-checked Spaniard Monreal in the box, leaving Mike Dean with no option but to give the spot-kick. The recently stellar Santi Cazorla stepped up and cooly fired home a very surprising Arsenal lead.

After dismantling another Blue advance, Arsenal were then awarded a free-kick for a foul on Sanchez, the resultant set-piece was taken by Cazorla and the little Spaniard found Giroud who headed home for 2-0 midway through the second half.

City struggled to get themselves back in the game and the visitors held on for a memorable and crucial victory which sees us move to within one point of the Champions League places.

Given it was such an impressive result, I shall now reflect on 4 positives Arsenal can draw from the game:

Before applauding the team as a whole, it is important to deal great praise to the incredible little Spaniard, Santi Cazorla, who was once again a vital component of the midfield, on and off the ball. His vision is somehow developing (quite a feat for an already meticulous passer) and his choice of ball was once again innovative, grinding out opportunities from near nothing, to make for the perfect catalyst in this wonderful Arsenal performance.

Similarly, the former-Malaga man started through the centre and put in an excellent shift to protect the back four. Very few would have taken note of his measly height of 5′ 6″, given his incredibly bold array of challenges and dominating physical presence, expressed even in the latter stages of the match, where most players would fade in terms of intensity in middle positions. What is there to say but simply stunning Santi.

In the past, these kinds of matches have seen Arsenal easily undone by sides of relative quality time and time again. This time however, the picture told very differently and all because of one man’s deceptive midfield role. Frenchman Francis Coquelin dictated the movement of midfield, simply by maintaining his holding role.

Wenger set the team up in a 4-1-4-1 formation, in order for Coquelin to guard the defence and anchor the midfield himself. Full-backs Bellerin and Monreal would then supply options for the Frenchman, with the three forming a midfield triangle on the attack. By doing so, it meant width came instead from our wide-midfielders on the charge, so the full-backs need not commit to the attack and leave acres of space open at the back to be exploited. Mertesacker and Koscielny had support behind and in-front, while the attack was no more disregarded with a dangerous four forming to hit the City back-line when pushing up. Simply brilliant Mr. Wenger.

3) Not Afraid To Play Without Possession

Absolutely battered in terms of possession Arsenal may have been, the 35% the lowest recorded by the Gunners in a Premier League match for over a decade, but the team seemed relatively comfortable to examine City’s unravellings in the final third before catching them on the counter.

In the past the need to ‘show-off’ as such a great passing team often impeded the attacking options, as Arsenal would knock the ball around for the sake of it and become fatigued in the process. Despite lacking a strangle-hold of possession, Arsenal did not chase the game, just merely waited for a stray pass or loss of balance to pounce, regain the ball and hit a counter charge.

Potentially a new style of play we may now be seeing from the Gunners, who did the basics right when in charge of the ball and boycotted their cliché style of football to chalk out an important result.

City really do boast an influential bunch of players, but let’s be honest, there are some players especially who get them going. One of these being David Silva who, no matter how hard he tried to elude the Arsenal back-line, even switching to the left at one point, could not find enough space to cause trouble.

The Gunners were borderline opting for a zonal-marking system at times, with Silva’s natural movement too fluid to man-mark, so cutting out the through-balls and pin-point passes into his feet was key and this created the effect of ‘isolating’ the Spaniard. As he was also on the left for the latter part of the match, this reduced City’s width, meaning Arsenal began controlling where the ball would be played.

With Silva lacking hold of the ball, this meant Aguero seldom gained possession outside of the attacking box, so attacks for City became focused on a punted long-ball, which can be difficult to execute. Arsenal deserve huge praise for having the tactical know-how and discipline to pull off the seemingly impossible and keeping Silva and Aguero quiet for ninety minutes.

So a well constructed performance from the Gunners technically and a result which screams ‘turning-point’. Brighton in the cup are the next task but with this result secured, Arsenal may now be more confident heading into those bigger clashes. Thanks for reading and feel free to comment below!