Liverpool take on Chelsea at Anfield tonight in the League Cup. Here’s a preview with team news, line-ups, predicted score and betting tips for the game.

Liverpool welcome Premier League leaders Chelsea to Anfield for the first leg of their Capital One Cup semi-final tie this evening.

The Reds head into the game in good form with Saturday’s 2-0 win at Aston Villa extending their unbeaten run to eight games with their last defeat coming against Manchester United back in December.

Brendan Rodgers side eased into the last four after beating Bournemouth 3-1 in the quarter final stage having already seen off both Middlesbrough and Swansea, but they’ll face a much stiffer test tonight when the league leaders come to town.

Chelsea continued their excellent form with a resounding 5-0 victory over Swansea City on Saturday which saw the Blues move five points clear at the top of the table after Manchester City lost to Arsenal the following day.

Jose Mourinho’s men booked their place in the semi finals with a 3-1 win at Derby and they’ll be hoping to get a positive result ahead of the second leg at Stamford Bridge next week.

Liverpool are set to welcome back Steven Gerrard after the skipper missed Saturday’s action with a tight hamstring.

Daniel Sturridge is back in full training but this game comes too soon for the striker so he joins Joe Allen and Jon Flanagan on the sidelines.

Mario Balotelli remains a doubt after missing the Villa game with a chest infection.

Chelsea are likely to recall goalkeeper Thibaut Courtois to the starting eleven after he missed the last three games with a broken finger.

Cesar Azpilicueta remains out through injury so Filipe Luis will start at left-back.

Mourinho isn’t expected to make too many changes to his side despite the likes of Andre Schurrle, Loic Remy and Kurt Zouma pushing for starts. 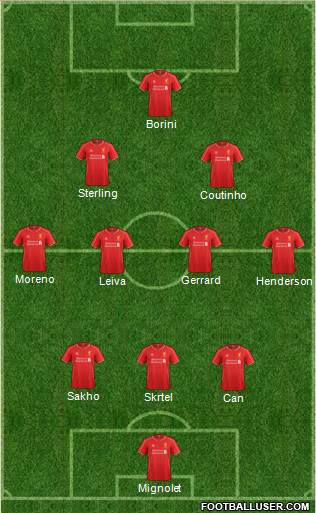 Liverpool 1-1 Chelsea: The Reds have found a bit of form lately but Chelsea are a formidable prospect and if Mourinho goes with his strongest eleven, I think the Blues will take a 1-1 draw back to the Bridge.

Chelsea are the favourites to win the game but Football-Talk can get you enhanced odds of 6-1 on an away victory and a staggering 10/1 on a Liverpool win, plus you can win a £100 free bet bundle. However, I fancy a 1-1 draw and that’s on offer at 13/2 while I also like the look of Raheem Sterling to open the scoring at 8/1. If we combine those bets in a scorecast, then we get very tempting odds of 54/1. Surely that’s got to be worth a couple of quid!?