Liverpool will be looking to avoid an upset when they host Bolton in the FA Cup on Saturday evening. Here is the side I think Brendan Rodgers will select:

Liverpool will be looking to avoid an upset when they entertain Bolton Wanderers in the fourth round of the FA Cup on Saturday evening. Here is the side I think Brendan Rodgers will select:

Defence: The Reds boss has confirmed that Glen Johnson is back in full training so could come back in to contention this weekend, but I think Javier Manquillo will be the man to start in the right wing-back role. Dejan Lovren is also training again but this game may come too soon so Martin Skrtel is once again likely to be joined by Mamadou Sakho and Emre Can at the back. Jose Enrique could come back in for Alberto Moreno on the left.

Midfield: Steven Gerrard and Jordan Henderon are likely to be given a breather and Rodgers has confirmed that Jordan Rossiter will feature so he could start alongside Lucas Leiva in midfield – although Joe Allen is available again after recovering form injury.

Attack: With Manquillo coming in on the right, it will allow Lazar Markovic to move into a more natural advanced role. Adam Lallana is likely to be recalled in attack with Philippe Coutinho and Raheem Sterling rested. Daniel Sturridge is back training again but this game will come too soon while Fabio Borini should get the nod over Mario Balotelli up front. 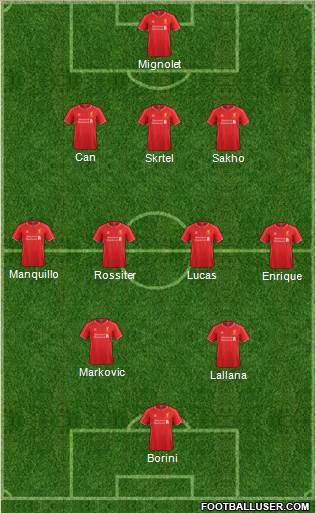