Liverpool take on Bradford at Stamford Bridge tomorrow in the FA Cup. Here’s a preview with team news, line-ups, predicted score and betting tips for the game.

Chelsea will be looking to avoid an upset when they take on Bradford at Stamford Bridge in the FA Cup on Saturday afternoon.

The Blues cruised through to the fourth round of the competition with a 3-0 victory over Watford at the Bridge two weeks ago and they were rewarded with another home tie against Bradford.

Having thrashed Swansea City 5-0 last weekend, Jose Mourinho’s men warmed up for the game with a 1-1 draw away at Liverpool in the first leg of their Capital One Cup semi final clash on Tuesday, and he’ll be hoping to book their place in the fifth round with minimal fuss tomorrow.

League One Bradford head to West London in mixed form having booked their place in the fourth round of the cup with an impressive 4-0 replay win over Millwall before losing 1-0 away at Yeovil last weekend, so they’ll be looking to get back on track and cause an upset this weekend.

Mourinho has the luxury of having a full-fit squad to choose from with Cesar Azpilicueta making his comeback with a late appearance off the bench in midweek.

The Spaniard is therefore likely to start at right-back with Branislav Ivanovic rested while Kurt Zouma will come in for skipper John Terry.

Chelsea are likely to take the opportunity to rest the likes of Cesc Fabrgeas, Nemanja Matic, Eden Hazard and Diego Costa with Tuesday’s semi final second leg in mind.

Mourinho has confirmed today that Andre Schurrle and Mohamed Salah will feature despite speculation linking them with a move away from the club. 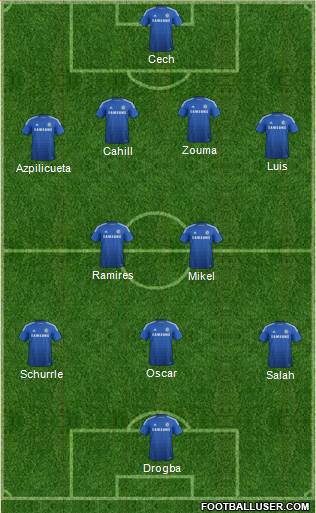 Chelsea 3-0 Bradford: The Blues have a formidable record at home and despite making several changes to their team, they can still field a strong line-up and I expect they’ll secure a comfortable 3-0 win tomorrow.

Chelsea are obviously the favourites to win the game but our prediction of a 3-0 win is on offer at 11/2 with Betfair. I also like the look of Andre Schurrle to open the scoring at 9/2 and if we combine those bets in a scorecast, then we get very tempting odds of 20/1. Surely that’s got to be worth a couple of quid!?