Arsenal take on Brighton at the Amex Stadium in the FA Cup on Sunday afternoon. Here’s a preview with team news, line-up, predicted score and betting tips.

Arsenal will be looking to book their place in the fifth round of the FA Cup when they take on Brighton & Hove Albion on Sunday afternoon.

A Saturday afternoon full of shocks has seen Chelsea, Manchester City and Tottenham all crash out of the competition at the fourth round stage so we’ve got an excellent opportunity to defend our trophy this year.

Obviously we can’t let the players look too far ahead and we have to concentrate on the first task at hand, which is to beat Brighton tomorrow, but there’s no denying the FA Cup has been blown wide open after today’s results.

We warmed up for the game with an impressive 2-0 win over Manchester City last weekend so we should be full of confidence heading to the South Coast tomorrow afternoon.

Arsene Wenger is expected to mix things up and it could see Wojceich Szczesny recalled in goal having missed the last three games.

Laurent Koscielny is likely to be rested so Calum Chambers is set to come back in to the defence while Hector Bellerin should pass a late fitness test on an ankle knock.

Alex Oxlade-Chamberlain is a doubt though with a groin issue but Wenger has confirmed that Theo Walcott and Mesut Ozil will start the game.

I hope we’ll see Alexis Sanchez rested as he needs a break at some point so Joel Campbell could make a rare start – unless rumours that he’s set for a loan move to Villarreal are true.

Mikel Arteta is still nursing a calf injury and he’s joined on the sidelines by Danny Welbeck, with the striker still out with a thigh problem.

Jack Wilshere is back in training but this game will come too soon. 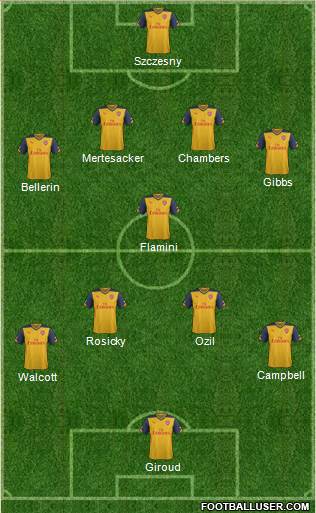 Brighton 0-2 Arsenal: We’ve slowly found our rhythm again and despite making a number of changes to the line-up, we should still have enough to ease past Brighton and book our place in the fifth round.

Arsenal are the favourites to win this game and thanks to Football-Talk you can get enhanced odds of 4/1 on an away victory with Betfair while you can also win £100 worth of free bets. A 2-0 win is on offer at 13/2 while I also like the look of Theo Walcott to open the scoring at 6/1. If we combine those two bets in a scorecast then we get very tempting odds of 25/1. Surely that’s got to be worth a couple of quid!?