Games involving Liverpool, Arsenal and Manchester United will all be broadcast live on television as the FA Cup fifth round TV listings are revealed….

Liverpool, Arsenal and Manchester United could all be broadcast live on television as the FA Cup fifth round TV listings are revealed….

FA Cup fifth round games involving Arsenal, Liverpool and Manchester United have all been chosen to be broadcast live on TV.

Having already beaten last years finalists, Hull City, the Gunners booked their place in the fifth round with a hard fought 3-2 win over Brighton & Hove Albion.

Arsene Wenger’s men were drawn to face Middlesbrough at the Emirates in the next round and that match will now be shown live on BT Sport on Sunday 15th February, kicking off at 4pm.

Manchester United will still have to navigate past Cambridge United in a replay after being held to a 0-0 draw by the League Two minnows last week.

Should Louis van Gaal’s men progress to the fifth round then their clash with either Preston or Sheffield United will be broadcast live on BBC1 on Monday 16th February, kicking off at 7.45pm.

Liverpool also face a tricky replay after drawing 0-0 with Bolton at Anfield and the winner of that tie will take on Crystal Palace at Selhurst Park in the next stage, with that match due to be shown live on BT Sport on Saturday 14th February, kicking off at 5.30pm.

Here is a full run through of the games chosen for live TV: 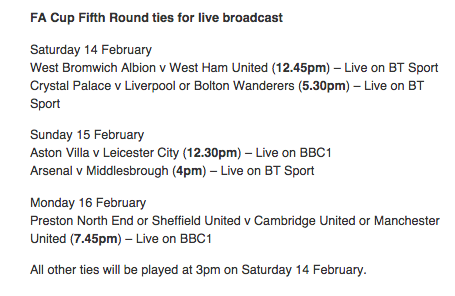