Chelsea are lining-up a deadline day move for West Ham attacker Enner Valencia and could meet his £20m buy-out clause, according to reports.

With the January transfer window coming to a close, managers are frantically trying to tie-up those late deals and strengthen their squads ahead of the second half of the season, so we’ll bring you all the latest news and gossip. Today, Chelsea are linked with Enner Valencia… 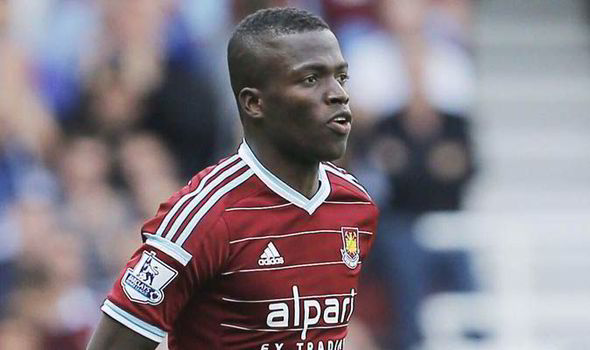 Chelsea are lining-up a deadline day move for West Ham attacker Enner Valencia and could meet his £20m buy-out clause, according to reports.

The Blues are on the verge of bringing in Colombian international Juan Cuadrado from Fiorentina with Mohamed Salah heading to Italy on loan as part of the deal.

However, with Andre Schurrle also close to sealing a permanent move back to Germany with Wolfsburg, it appears Jose Mourinho could be set to make a late swoop to try and bring in another attacker before the winter transfer window closes on Monday night.

It seems the Portuguese coach is ready to raid a local rival as the Daily Mail are reporting that Chelsea are eyeing a last ditch move for West Ham star Enner Valencia.

The Ecuadorian international only moved to Upton Park last summer in a £12m deal but the newspaper suggests that the Blues are prepared to meet his buy-out clause, which states he can leave if a Champions League club comes in with a £20m offer.

Sam Allardyce will no doubt be desperate to keep hold of him as he looks to try and maintain their push for a top six place and the Mail claim West Ham chiefs are ready to renegotiate his contract which would no doubt see his buy-out fee increase significantly.

However, as it stands, they could do little to prevent Valencia leaving if Chelsea do meet his current £20m clause, so we could be seeing the forward make the move across West London on deadline day.

Valencia earned his move to the Hammers after impressing at the World Cup but he’s only managed three goals so far this season, so it would be something of a surprise if Chelsea did make a move for him.

The 25-year-old is predominantly a centre-forward but he’s also capable of playing out in the wide positions, so he’d give Mourinho plenty of options if they do end up luring him to Stamford Bridge.